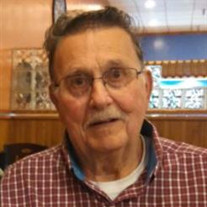 Alan Rigg, 77, died Wednesday, September 20, 2017 at home after battling a long-term illness related to heart disease. He leaves his wife Maria Ruano, daughter Drs. Walter & Lisa Knysz III, daughter Heather & Arash Aminian, son David & Kyla, his step children Dalia & Joe, John & Erica, David & Angie, Ruben & Beverly, Homer & Gaby, his brother John, lots of grandchildren, relatives, and many close friends. In his early years, Alan grew up in Flint MI and eventually graduated from Adelphian Academy with gaining life-long friends. He moved to Hinsdale, Illinois where he met Rosalind Hays and was married. After moving back and forth between Michigan and the Chicago area, Alan & Rose finally settled in Beaverton MI where they lived with their children on 40 acres. Alan and Rose were married for 29 years until her death of cancer in 1995. Years Later, Alan was blessed to meet Maria and enjoyed traveling the country with her. They mostly spent time with family traveling between Florida, Texas, Indiana, and Michigan. They would have still been traveling together today, however, were stricken with health issues for the last few years. Alan has always had a passion for automobiles. Specifically repairing wrecked ones. He worked at several dealerships, and eventually owned and operated a body shop for over 30 years. Even to this day, he was still repairing several vehicles with his son David in his garage. He also had a variety of antique vehicles in multiple stages of repair. Alan loved going to car shows, camping with family, watching and talking about baseball and football, cheating at card games like Rook, drinking Dr. Pepper, and working in a garden (as long as there wasn’t any spiders or snakes!) A memorial service for Alan will be at the Holly Seventh Day Adventist Church on Friday, September 29th 2017 at 3:00pm.

The family of Alan E. Rigg created this Life Tributes page to make it easy to share your memories.

Send flowers to the Rigg family.