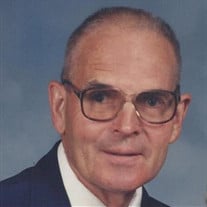 Allan Kerton, age 92, of Holly, died March 24, 2017. Funeral services will be held at 2:00 PM Mon. March 27, 2017 at the Dryer Funeral Home, Holly with Pastor Cliff Schroeder officiating. Burial will be in Lakeside Cemetery, Holly. Visitation will be from 2-7 PM Sun. He was born at the family farm on White Lake Rd. to Lee and Florence Kerton. Allan graduated from Fenton High School in 1942, then served in the US Army before marriage to his wife of 62 years, Mary Woodworth. She preceded him in death in 2012. Allan served on the Holly Village Council, was a long time member of the Holly Lions Club, and was a master gardener. Mary and Allan enjoyed traveling to Hawaii, England, Switzerland, and Australia. Allan was an owner of Kerton Lumber in Holly from 1952 to 1988, beginning work with his father and cousin Edgar Teggardine, then working with his children until retirement in 1988. He was a great father to four children, Mark Kerton and Barb Baruth, Marilyn and Lyle Jones, Rob and Julie Kerton, and Ray and Dana Kerton. He also leaves four grandchildren, Nicole and Dan Ryan, Kelsey Kerton, Amelia Kerton and Travis Kerton; great-grand son Charlie Ryan; brother-in-law Ron Poel; nieces and nephews Steve and Cheryl Poel, MaryAnn Poel, and Nancy and Kevin Mueller; many cousins and friends. He was preceded in death by his wife Mary and his sister Arlene Poel. Memorial donations may be made to the Calvary United Methodist Church of Holly. www.dryerfuneralhomeholly.com

The family of Allan C. Kerton created this Life Tributes page to make it easy to share your memories.

Send flowers to the Kerton family.