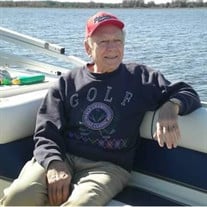 Anthony John Neuwirth, 89, formerly of Lake Placid, Florida, died peacefully on September 9, 2015 in Murrieta, California. Tony was born December 23, 1925 in Niagara, Wisconsin to Anton John Neuwirth and Adeline (Stefan) Neuwirth, one of six children. He spent most of his life living in the metro Detroit area and later in Gaylord, Michigan. Tony was recognized as a gifted learner in childhood, graduated high school at age 16, and went on to earn a Bachelor’s degree in Civil Engineering and Master’s degree in Industrial Administration from University of Michigan. He worked for many years in the automotive industry for Ford and GM, and had served in the Air Force at the end of World War II. Tony was an avid boater and enjoyed golf and skiing. He loved reading, singing, road trips, remodeling homes, and researching genealogy. His favorite food was succotash and he loved WJR and The Detroit News. Tony was preceded in death by sisters Elaine, Ruth, Gladys, and wife Judith Marie (Bullock). He is survived by sisters Jean Moln and Adeline Brown, children Andrew (Donna) Neuwirth, Janine (Greg) Cowell, Karen (Tom) Ludwick, Gail (Al) Geisler, Jill Neuwirth, and Lee (Tony) Adkisson, stepsons Joseph and Richard (Joann) Lynch, twelve grandchildren, and five great-grandchildren. Tony will be remembered as a hard-working and loving father with a good sense of humor and a positive attitude. Viewing will be held at Dryer Funeral Home in Holly, Michigan from 11:00am-12:00pm followed by a memorial service from 12:00pm-1:00pm. Burial with military honors and burial for his wife Judith will take place at 1:30pm Monday, September 21, 2015 at Great Lakes National Cemetery. In lieu of flowers donations may be made to Cure Alzheimer’s Fund at www.curealz.org/donate. “Don’t cry because it’s over. Smile because it happened.” -Dr. Seuss

The family of Anthony J. Neuwirth created this Life Tributes page to make it easy to share your memories.

Send flowers to the Neuwirth family.