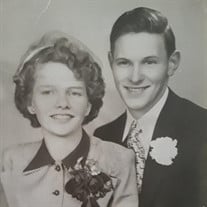 Not sure what to send?

Vanas, Arthur C. Orlando, FL Formerly of Holly, Michigan Arthur (Art) Charles Vanas passed out of this life on Feb. 8, 2022 after a brief stay in the Veteran’s Hospice in Orlando, where he was attended by the wonderful hospice angels and was able to see his children and grandchildren for a last time to be surrounded by their love as he left this realm. Art was born on December 10, 1931 in the home of his parents Joseph and Rose Vanas. He grew up poor and did not finish high school, but later in life he acquired a college degree and became a licensed contractor. Art Married Opal Jean Bigford shortly after being drafted into the United States Marine Corps. His basic training took place in camp Pendleton CA. Opal joined him there and they soon welcomed their first born Pamela Mae. Soon after this happy event Art boarded a ship headed for the shores of Korea for a mission he had volunteered for that had projected an 80% mortality rate. He had a friend who had entered the conflict previously and had been captured by the North Koreans. Art wanted to do what ever he could to end the conflict and bring his friend and many others home safely. Thankfully, the armistice was signed while they were en route and he did his over seas service in Okinawa. Art and Opal had three more children with a nine year break between daughter number two, Vicki Lu and daughter number three, Kimberly Ann. During that time he and Opal parented a number of foster children who were then able to experience, however briefly, a father figure who worked hard every day, but was never too tired to play with his children. After living a number of years as the only male in a household of females his fourth and final child, was a son, Thomas Arthur. As his children can attest, Art was a mixture of strong and tough with tender and loving. He had an amazing ability to attract both children and animals who were drawn to his humor and ability to be gentle. This love for animals has been passed down to all of his children and grandchildren who have themselves parented a number of various pets over the years, and lucky for the creature who crosses any of their paths. Art and Opal attended the Holly Seventh-Day-Adventist Church for most of their married life. Art worked overtime and some nights to allow his children to attend the Christian school, while also building two houses from the ground up, maintaining his own cars, building various pieces of furniture and being available to help whoever needed it. It is a testament to a life well-lived that so many call him friend, uncle, brother, grandpa and of course Dad. Art was preceded in death by his first-born, Pamela Mae Vanas Peterson in 2012 and by his beloved Opal Jean in 2018. He is survived by his daughters, Vicki Vanas (David Greeley), Kimberly Vanas Demmy (Scott Demmy), his son Thomas Vanas (Jenise Little), his grandchildren, William Peterson II, Haley Peterson, Sarah Vanas, Zeke Vanas (Mkenna Nuttall) and Jordan Vanas Peterson, his brother Joe Vanas and sister Charlotte. There will be a burial held at Great Lakes National Cemetery Holly, MI Wednesday, May 25, 2022 at 10:00 AM with a luncheon to follow at Seventh-Day Adventist Church located at 16180 Fish Lake road Holly Michigan.

Vanas, Arthur C. Orlando, FL Formerly of Holly, Michigan Arthur (Art) Charles Vanas passed out of this life on Feb. 8, 2022 after a brief stay in the Veteran&#8217;s Hospice in Orlando, where he was attended by the wonderful hospice angels... View Obituary & Service Information

The family of Arthur Vanas created this Life Tributes page to make it easy to share your memories.