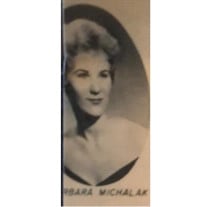 Barbara Ann Ostrowski was called to rest by her lord Jesus Christ on September 10, 2019. She was born Barbara Ann Michalak to Stanley and Selma Michalak on December 15th, 1938 in Detroit Michigan. One of 5 siblings, Barbara was preceded in death by her brother Don Michalak and sister MaryAnn Pomictor/Drew. She is survived by her brother John Michalak of Detroit, Michigan and sister Patricia Bonilla of Far Rockaway NY, along with 22 nieces and nephews. Barbara spent her childhood in Detroit, Michigan and graduated from St. Rita High School on June 10, 1956. Barbara went on to work at Chrysler Missile where she met her future husband Joseph Ostrowski whom she wed on January 2nd, 1960. A woman of great faith and a member of the Catholic church, Barbara and Joseph went on to have 5 children; daughter Lauralee Ann Freeman (Frederick), and sons, Joseph Ostrowski, David Ostrowski, Michael A Ostrowski (Jacqueline), and Daniel Ostrowski (Heather). She was preceded in death by sons Joseph Ostrowski and David Ostrowski. A loving wife, mother, grandmother, and great grandmother, Barbara went on to have 7 grandchildren and 4 great grandchildren: Kimberly Henke (Naudia Tabor and Serenity Bonner), Riley Freeman (Danny Lee Harvey and Ava Harvey), David Joseph Ostrowski, Taylor Ostrowski, Jake Ostrowski, Jackson Ostrowski, and Callahan Ostrowski. Barbara was also a loving and lifelong friend to many. She was part of a “club” (Sigma Phi) consisting of her eleven closest friends with whom she shared lifelong friendships, knowing them since grade school. Barbara spent most of her adult life working at Indiana-Purdue University at Fort Wayne (where she moved with her family in 1980) as an administrator within the Continuing Education Department. An avid reader and believer in higher education, Barbara went on to earn her Associate’s degree in General Studies from IPFW in May of 1989 all while working full time and raising children. Barbara also earned a Certificate from the School of Arts and Sciences in Gerontology in May of 2005. Barbara enjoyed her retirement years at her lake house Hamilton, IN where she and her husband Joseph lived for the better part of 2 decades. Barbara was a member of the Red Hat Society and an active member of St. Michael’s church in Hamilton, IN. A woman of great faith, Barbara volunteered as a bible study leader and was active at the YMCA where she was part of a water aerobics class for seniors. Barbara will be missed by all that knew her as she made a positive impact on all who had the opportunity to be part of her life. May she rest in peace. Services are being held at the River Church in Holly, MI, Monday, September 16, 2019 @ 10:30am. www.dryerfuneralhomeholly.com

Barbara Ann Ostrowski was called to rest by her lord Jesus Christ on September 10, 2019. She was born Barbara Ann Michalak to Stanley and Selma Michalak on December 15th, 1938 in Detroit Michigan. One of 5 siblings, Barbara was preceded in... View Obituary & Service Information

The family of Barbara Ann Ostrowski created this Life Tributes page to make it easy to share your memories.

Barbara Ann Ostrowski was called to rest by her lord Jesus Christ...

Send flowers to the Ostrowski family.