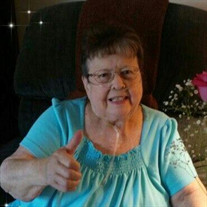 Bernice {Bernie} Ellen Discianno (Smith) passed away peacefully at home in Holly, Michigan on February 13, 2019. She was surrounded by Daniel Discianno, her loving husband of 67 years, and her daughter, Laura (Rev. Tom) Miller. Bernie's amazing legacy will live on in the lives of Dan and Laura and in the lives of her wonderful granddaughters Kasey (Craig) Logan, and Jenna (AJ) DeMasellis, and in the hearts of her seven great grandchildren (Ivy, Felicity, Josiah & Emma Logan and Lincoln, Harrison and LouEllen DeMasellis). She is also survived by her sister, Esther Kennedy, of Chicago, IL and brother, David Smith, of Las Vegas, NV. She was preceded in death by her parents Herb and Erma Smith, her son, Stephen Daniel Discianno, and her brothers, Miles Smith, Alan Smith, Lawrence Smith and Don Smith. Bernie lived an epic life of 85 years. She was born on Drummond Island, Mi., the third oldest of 7 children. The family later moved to Sault Ste. Marie, Mi, traveling across the frozen waterway on sleds as the ice cracked behind them. Before the days of penicillin, Bernie had rheumatic fever three times as a child, which damaged her heart. When she woke in pain at night her sister, Esther, would often massage her legs and arms. She helped to care for and raise her youngest brother, David, while her mom worked to help support the family. She met Dan, a Coast Guardsman, just after her 16th birthday and married him 2 years later. They had two children, Stephen Daniel and Laura Anne. Stephen only lived five days which forever gave her a sympathetic heart toward others in their time of loss. As a military wife she experienced the frigid coasts of Michigan's upper peninsula, the white sandy beaches of Hawaii, the mountains and smog of California, and much more of this country's beauty, including living in a lighthouse in Wisconsin. She was a medical assistant for 20 years helping to support the family. Later, she and Dan owned and operated ABC Chauffeur, safely transporting railroad crews back to their home depots for over 20 years. Bernie was able to bless so many with her generous heart and giving spirit. She never met a stranger as she had the gift to connect to the lives of everyone she met. She loved to visit and could tell a detailed story like no other. She enjoyed watching old movies and reading mysteries. In their years of moving as a military family, it was always her priority to find a church. She taught Sunday School, served as a funeral dinner coordinator, and in recent years worked as a Bible Storyteller in Vacation Bible School. In 2000 she and Dan became members of the First General Baptist Church of Waterford, Mi. They attended faithfully, until her disease and declining health prevented travel, but their prayers and support continued. Bernie’s faith in God helped her persevere through many health trials and pains of this world. As she always planned everything, she also planned her homegoing. She gracefully accepted hospice care when the time came. Her wonderful life and impact will continue to be celebrated by her surviving family and friends. Bernie is now at peace, free from pain, in the presence of her Savior, and in the blessed company of many loved ones already with the Lord. Bernie knew her final home would be in heaven and asked us all to meet her there. She will wait for us ‘just beyond the moon.’ Memorial Service will be held at First General Baptist Church of Waterford, Mi. 2933 Frembes Road, Waterford, MI 48329, Saturday, February 23, 2019 at 1:00 p.m. Visitation will be from noon to 1:00 p.m. Rev. Thomas Miller officiating. A luncheon will follow the service. www.dryerfuneralhomeholly.com

The family of Bernice Ellen Discianno created this Life Tributes page to make it easy to share your memories.

Send flowers to the Discianno family.