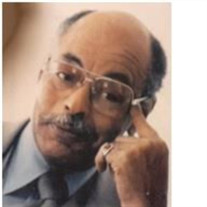 Cesante Alrey, age 92 years young, of Holly, passed away on Memorial Day, Monday, May 31st, 2021. Cesante was born July 29, 1928, in Detroit, Michigan to Spencer James and Clara Chaney Alston. He had four siblings, three who preceded him in death: sisters Vivian Masterson and Ora Lee Turner, brother Ernest Alston, and one surviving brother, David C. Alston. Cesante was the loving father of Sanita Lori DeBose (Richard), Aten Cesante Alrey, and Tanisa Dori Alrey-Ward. He was the proud grandfather of Danesa, Spencer, Quincy, and Cesante Ward. He is further survived by nieces, nephews, other relatives and close friends. Cesante graduated from Detroit’s Cass Technical High School. At the young age of 17 years old, he began his service in the U.S. Army during World War II, based in Hawaii (prior to statehood), where he attended classes at the University of Hawaii and toured those native lands. Following his time in the service, he spent time “traveling the world”, and resided in numerous cities throughout the U.S. A majority of this time included living in the “Windy City” of Chicago before returning to his hometown of Detroit. Cesante was an award winning, and renowned artist during the 1950s, turbulent 1960s, and 1970s. He found his cause of protest via his inspiring and thought-provoking works of art: primarily painting and creating their collaborative written descriptions dealing with global racial, economic, political and social injustices. As a Detroit artist he was heavily involved in contributing to the advancement of the civil rights movement, both locally and nationally by assisting in the fundraising efforts to support the Freedom Riders through donations of artwork. In addition to the time spent with his work in the fine arts, he performed acts of magic (including sword swallowing and fire eating) to entertain family, friends and occasionally local night clubs. For many years he also enjoyed spending time at an annual get-together in Detroit with a group of long-time buddies who called themselves “The Milford Street Gang”. While still pursuing his art career, Cesante began working for the State of Michigan. His most memorable position was as a graphic designer for the Highway Department (now the Dept. of Transportation) in Lansing, MI. In 1983, he retired as a Compliance Officer with the Secretary of State’s Offices in both the Detroit and Flint regions. He then started to spend his time as “an artist of his land” at his longtime home in Holly, Michigan. He lived in the historic African American rural subdivision, The Great Lakes Country Club. His time in this area spanned 60 plus years, making him the longest living property owner/resident within this northern Oakland County township of Holly. During his retirement years, Cesante started to create less of an “art on the canvas” and more “art on the landscape” of his home and property, the Chateau de Cesante sitting on top of the hill, overlooking the lake. This is where Cesante, a polymath and philosopher on life found his peace and tranquility. Those that knew Cesante (affectionately called “Sonny” by his parents and immediate family members and called “Vino” by close friends), will forever remember him as a man that could answer all questions, as well as spend time talking of his world travels and experiences. So Said Cesante. Visitation will be from 12:00 - 1:00 PM, Wed. June 9th, 2021, at the Dryer Funeral Home. Immediately following visitations, there will be a private ceremony at the Great Lakes National Cemetery in Holly, Michigan, honoring him as a victory medal recipient and World War II veteran. In lieu of flowers, the family requests donations in his honor be made to: St. Jude Children's Research Hospital (https://www.stjude.org/donate/)

Cesante Alrey, age 92 years young, of Holly, passed away on Memorial Day, Monday, May 31st, 2021. Cesante was born July 29, 1928, in Detroit, Michigan to Spencer James and Clara Chaney Alston. He had four siblings, three who preceded him in... View Obituary & Service Information

The family of Cesante Alrey created this Life Tributes page to make it easy to share your memories.

Send flowers to the Alrey family.