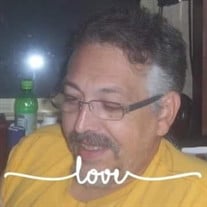 Estep, Christopher Wayne (Wheels), passed away peacefully surrounded by family on November 17, 2021 in Grand Blanc, MI. Chris was born on February 22, 1962 in Grundy, Va. to the Late James Harold Estep and Maryalice (Hurley) Estep. On July 11th, 1997 , Chris married his love Georgia in Toledo, OH. Chris was given his nickname wheels from his friends who liked to race Chris in the hallways of school in his wheelchair. (He would win most times.) Chris was a 1981 graduate of Holly High School. Chris worked for 15 years as a sales clerk for Big Lots in Waterford, MI. Chris had so many different passions in his life, he loved his family dearly especially his children and grand children. Chris had a love for putting together model cars (all nascar Richard Petty). Chris was a member of the Flint Flyers Wheelchair Basketball Team. He was also a Member of the American Wheelchair Bowling Association where he won several trophies. Chris was also A member of the Holly Little League, if he was not playing ball, he was helping his dad keep score for his team. Even though you left us so soon, our hearts know that you are not suffering any longer, We know that it was your time for the Angel’s to bring you home. We know that you will be running thru the gates of heaven and keeping dad on his toes of chasing you. For now the Kingdom is yours to run thru, fly high and your spirit will stay strong with in us. And we will never forget your time here on earth. Chris is preceded in death by his father James Harold Estep, His Grand Parents the late Roscoe and Media (Scarberry) Estep, and the late Charles Edgar and Elizabeth (McLemore) Hurley. Also, are 5 uncles Lonnie, Roger, Bennie, Ronnie Ira Estep and Johnny Hurley, 3 aunt’s Mildred Estep, Lucy (Hurley) Estep and Shirley (Hurley) Tester. Chris is survived by his Mother Mary Alice (Hurley) Estep, his wife Georgia (Woodworth) Estep, also surviving are his children Christopher (Woodworth) and Michelle Woodworth. Chris had 4 Grandson’s Christopher, Anthony, Aidan and Waylon, Chris also leaves behind 1 sister Teresa(Jamme) Estep, 2 nephew’s Adam(Amanda) Jeske and Austin(Chelsea) Jeske. And Great niece Alivia and Great nephew Axle. And many Uncle’s, Aunt’s and Cousin’s. Chris will be Cremated and we will be having a Celebration of his life in the spring time. We ask that in lieu of flowers if anyone would like to make a donate in Chris’s name. Please make it to the American Heart or Lung Association. www.dryerfuneralhomeholly.com

The family of Christopher W. Estep created this Life Tributes page to make it easy to share your memories.

Send flowers to the Estep family.