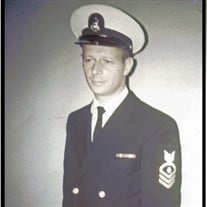 Daniel Albert Discianno was called to his heavenly home on October 28, 2020 in Pontiac, Mi. He died of complications from Covid 19. He is survived by his daughter, Laura (Rev. Tom) Miller, granddaughters Kasey (Craig) Logan, and Jenna (A.J.) DeMasellis and seven great grandchildren: Ivy, Felicity, Josiah & Emma Logan and Lincoln, Harrison and Louellen DeMasellis. He was preceded in death by his son, Steven Daniel, wife Bernice (Smith), his parents Nick Discianno and Ethel (Belyea) Discianno, his step-mother Louise (Meister) Discianno, and sisters, Ruth (Pitts), and Margaret. Dan was born in 1931 in Elmwood Park, IL. He joined the US Coast Guard when he was 17 and was stationed in Sault Ste. Marie, Mi, in 1949. There he met his wife-to-be, “Bernie” Smith, and they were married in 1951. They were transferred to Hawaii in 1955 where Dan served on a buoy tender traveling the South Seas. Later he was transferred to the Great Lakes region, serving at Manitowoc, Mi Lighthouse, Two Rivers Lifeboat Station and Rawley Point Lighthouse in Two Rivers, Wisconsin. In 1965 Dan was serving on Grays Reef Lighthouse in the straits of Mackinac when it was hit in a heavy fog by a freighter. Later that same year, he was promoted to Chief Engineman and transferred to Long Beach, CA where he served on the icebreaker, USCG Burton Island. The following year the ship took supplies and scientists to McMurdo Sound in Antarctica. After 20 years Dan retired from the Coast Guard. He was proud and honored to have served his country. “Semper Paratus.” Following retirement, the family moved back to Michigan and settled in Flint. Dan became Service Manager for Mike Young Chrysler Plymouth Dealership in Mt. Morris, Mi. Years later he and Bernie began a small business, ABC Chauffeur, transporting RR crews for Grand Trunk, CSX and Canadian National Railroads. The business grew operated for nearly 22 years until they retired in 2005. Dan loved building model airplanes, ships, RC planes and do HO trains dioramas, but his particular joy were his granddaughters. He taught them, among other things, how to swim in the family pool. As a loving grandpa he was proud of their many accomplishments. When Bernie became wheelchair bound, Dan faithfully attended her needs, caring for her every day. Dan always had a joke to tell or a story from his years in the Coast Guard. He was a loving husband, father, grandfather and friend, always taking the time when you needed help. He will be greatly missed.

Daniel Albert Discianno was called to his heavenly home on October 28, 2020 in Pontiac, Mi. He died of complications from Covid 19. He is survived by his daughter, Laura (Rev. Tom) Miller, granddaughters Kasey (Craig) Logan, and Jenna (A.J.)... View Obituary & Service Information

The family of Daniel A. Discianno created this Life Tributes page to make it easy to share your memories.

Daniel Albert Discianno was called to his heavenly home on October...

Send flowers to the Discianno family.