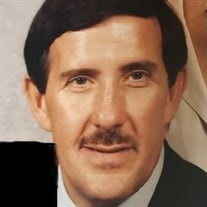 Dennis M. Schmedlen, age 75, entered into eternal life Saturday morning, March 12, 2022, at his home, lovingly surrounded by family. Dennis was born November 1, 1946, in Holly, Michigan, the son of Earl Eugene Schmedlen and Rhoda Taylor. He graduated from Oxford High School in 1964, where he was a member of the varsity football team. He attended Oakland University, graduated with a liberal arts degree, and moved to Toledo, Ohio in August 1970, where he lived until his death. Dennis took his first job with Owens Corning Fiberglass, hired as one of their first programmers, and worked his way up the ladder from programmer to analyst to senior project manager and ultimately, Director of Systems Development. In 1990, Dennis left Owens Corning Fiberglass and co-founded the Technology Group International, a business software company, where he served as Senior Vice President until he retired in 2010. He was an intelligent, generous, family-oriented, Christian man who loved fishing & hunting, taking his family on vacations, spending time with his grandchildren, rooting for the Detroit Tigers, playing fantasy football, and eating out at restaurants, but also enjoying his daughter Renee’s gourmet cooking. An avid University of Michigan football fan, he held season tickets for over 20 years, sharing many Michigan victories with his daughter, Rachael, always eager to discuss the state of the team with his family and friends, and exhibited a youthful exuberance while high-fiving everyone around him after every UM touchdown. Dennis lived with Parkinson's disease for the last twelve years of his life. He battled the disease with the most amazing grace, bravery and strength. He lived every day with positivity and determination not to let the disease keep him from doing the things he loved. However, ultimately it would be cancer that brought him to the end of his life on this earth. Everyone who was blessed to know Dennis experienced what an extremely kind, loving, and gentle, but playful and jovial person he was, who loved his family very much. He is proceeded to our Lord by his parents, brother Doug Schmedlen, brother-in-law Thomas Thrasher, and nephew Nathan Schmedlen. He leaves behind his daughters, Dr. Rachael Schmedlen, Renee (Justin) Hires; sister, Mary Lee Thrasher; sister-in-law, Rose Schmedlen; former wife, Louise Munich; grandchildren, Grace Hires, Catessa Hires, Maddock Hires, Jacob Hires, and several nieces, nephews, and great-nieces and nephews. He will be greatly missed by all who knew him. Visitation will be held from 10am-12pm on Friday, March 18th at Dryer Funeral Home, 101 S. 1st St, Holly, MI 48442, followed by a funeral service and graveside burial at Lakeside Memorial Cemetery, 860 Thomas St, Holly, MI 48442. A memorial service will be held at 10:30am on Saturday, April 2nd at the Waterville United Methodist Church, 7125 Waterville Monclova Rd. Waterville, Ohio 43566 followed by a private reception. In lieu of flowers, the family requests considering a donation to one of Dennis’ favorite charities: Waterville United Methodist Church: https://www.watervilleumc.org/stewardship The Billy Graham Evangelical Association: https://billygraham.org/ www.dryerfuneralhomeholly.com

The family of Dennis M. Schmedlen created this Life Tributes page to make it easy to share your memories.

Send flowers to the Schmedlen family.