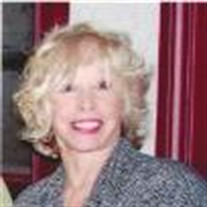 "Saved by His Amazing Grace" Dolores Ann Powell (Klingensmith) Age 80 years. Born October 27, 1934 Passed on to Glory, peacefully in her home surrounded by all her family on Sunday October 4, 2015. Beloved wife of Norman Joe Powell; Beloved Mom of Kim R. Gagel (James Gagel), Norman R. Powell (Lorna Powell), Julie Jo Leslie (James Leslie), Erin Grosjean (John Grosjean); Beloved Grandma to 8; Cody VanderKaay (Corinne VanderKaay), Wrylie DeLong (Joseph DeLong), Stephanie Baroni (Brandon Baroni), Jacob Leslie, Jessie Patterson Damavoletes (Kyriakos Damavoletes), John Grosjean (Alaina Grosjean), Justin Grosjean (Kaleigh Grosjean), Alyxandra Conyers (Scott Conyers). Beloved Great Grandma to 11; Mazzee & Cyrus VanderKaay. Jordyn Guthrie & Joesey DeLong. Trinity Baroni. Ryder, Lake & Brooksie Patterson & Armor Damavoletes. Gideon Grosjean. Clemontine Conyers. Caring Step Grandma to Robert Gagel (Asia Gagel), Craig Gagel & Tara Hambrick (Brad Hambrick). Caring Step Great Grandma to Chase & Skye Gagel. Ethan & Owen Hambrick. Taylor & Andrew Damavoletes. Loving Sister to Robert Klingensmith, Keith Klingensmith and Cheryl Graves. Loving Aunt to many nieces and nephews. Preceded in death by her Mother, Gladys Katherine Klingensmith, Her Father, Arthur Dinsmore Klingensmith, Her Grandsons Jacob Joe Leslie & Brooksie Patterson. More than anything, first and foremost she loved the Lord her Savior Jesus with all of her heart. She absolutely adored her husband who was her "Handsome Prince and her Tulip." For almost 62 years of marriage they had a devotion to each other that was like no other with the truest, deepest love! She was an awesome mom/mama bear/marnie to her 4 children! She was such an excellent homemaker for her husband and children growing up. She raised them to always be compassionate, kind, love others and love Jesus. She cherished all her grandchildren and remembered all of their birthdays. She loved ALL of her family so very much, and kept them all in her prayers faithfully. She loved to read and study Gods word, pray and help the downtrodden financially. She also had a great love for the Jewish people. She is very well known for her love of remodeling all her homes and redecorating them so beautifully. She had a lot of fun at it, and was an amazing designer and decorator! She was affectionately known as "Tiger Girl" all her life, so named by her 2 brothers at a young age because of her remarkable strength of character. She was very courageous, and full of grace during her years of being ill. She was very precious to all of her family, as they were to her! Philippians 1:21 For me to live is Christ, and to die is gain.

The family of Dolores A. Powell created this Life Tributes page to make it easy to share your memories.

Send flowers to the Powell family.