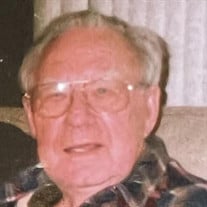 Donald Church Jr., age 90, of Holly, born on April 10, 1932, died in his sleep at home on Fri. April 15, 2022. He had just reached the age of 90, having lived most of his life in Holly, MI. He was the proud husband of Frances. He came to Michigan where he proudly worked for GM in Flint from 1954-1989. At the house in which he lived, he worked on different things to make it beautiful. This is something he was very proud of. Every day he would go through his memories of the things he had accomplished. He was so proud of his life he had and everything he had built or remodeled in his home. So much pride in everything he did. He did odd jobs of cutting wood in Oregon and was an electrical helper. He came to Michigan and did it independently with his own company called Don and Joe Tree Trimming Service, while also working at GM. When he was younger he also worked in the coal mines. Along the way, he grew many things in his huge gardens which he loved and always shared with others, and enjoyed hunting, fishing, and took in many strays. He was very proud of his sycamore trees in front of his home which he had planted and was very happy when the newspaper wrote an article about them. In 1963 Gregory Allen Church was born, his only son who he loved. Once he retired, he absorbed his time with his grandkids Gregory and Amber, always doing things with them and creating many memories which he held dear. Later he had more grandchildren and great-grandchildren that he loved with all his heart. Family was very important to him. Donald is survived by his wife Rosie Frances "Frankie" Elkins Church; son Gregory Allen Church; grandchildren Gregory, Amber, Ian, Wesley, and Haylea; great-grandchildren, Levi, Wayne, Jedidiah, Langston, and Greyson; sisters Jeanette Stacy and Diane Lucadou; brothers Edward Michael and Farley Michael. He was preceded in death by sisters Judy Vanover and Lucille Charles. Funeral services will be held at 12:00 Noon, Mon. April18, 2022, with visitation from 10 -12 Mon. at the Dryer Funeral Home, Holly. www.dryerfuneralhomeholly.com

The family of Donald Church Jr. created this Life Tributes page to make it easy to share your memories.

Send flowers to the Church family.