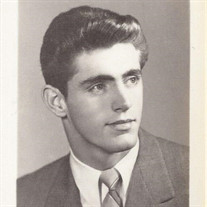 ` On July 12, 2017, Donald Roy Harrower, age 88, passed away at the longtime Harrower residence on Mackey Road in Holly, Michigan. Don was born in 1929 in Detroit, to Alex and Esther (Rossiter) Harrower. He was predeceased by his wife, Barbara, and missed her greatly these last couple years as his health declined. Don and Barb met at the neighborhood skating rink when she was just sixteen and he fourteen, and they both graduated from Cooley High School in Detroit. Don was a track star in high school, winning City championships in high and low hurdles, both indoor and outdoor. He also ran the anchor leg on Cooley’s sprint relay and captained the city-champions Cardinal track team as a Senior in 1947. Don was President of Cooley’s Senior class that year, and was a running back on the Cooley football team that won the City Championship, defeating St. Anthony in the Goodfellows Game before 35,000 fans in Brigg’s Stadium (later known as Tiger Stadium). Don would go on to college at Michigan State Normal College (now Eastern Michigan University), where he would continue to run track (hurdles, pole vault and sprints) for four more years, eventually attaining a Bachelors Degree in Physical Education with minors in Natural Science and Mathematics from MSNC on June 16, 1951. Three days later Barbara Scott and Donald Harrower were married. They would spend the next 64 years together, until Barb’s death in April of 2015. Barb and Don had three children—Jo, Scott and Delores (Lori). During the 1950s Barb was at home raising the children while Don was teaching and finishing his Masters Degree in education from the University of Michigan. He soon became Principal at Mabel D. Bensett Junior High School in Holly. In those days teaching was not a well-paid profession, and in addition to his Administrative duties, Don coached athletics and drove the school bus for a few extra bucks to make ends meet. In the summer of 1960 the family moved to Germany, where Don had been hired to teach in the US Army school system. They would live there for the next five years, with Barb working in the Army libraries and Don getting booted upstairs from the classroom to Vice Principal to the Office of the Superintendent of the Army schools. Barb was always an adventurer, and loved planning each summer's vacation travels. As a result, the Harrowers traveled extensively throughout Europe, Scandinavia, the British Isles, and the Middle East and Holy Land. The five years abroad were a seminal and formative period for the family, filled with exciting and unforgettable experiences. Upon returning to Holly in 1965, Don, tired of Administration, moved back into the classroom (“where I always belonged”, as he would put it). He would spend the next 20 years teaching in the Pontiac school system, while Barb worked in the Holly Area Schools as a teacher and librarian. Barb and Don loved skiing and were members of the Ski Patrol at Mt. Holly for many years, with Don serving as First Aid Instructor for the patrol and finally earning his National patch for his decades of service. He also served as the first President of the Oakland County Human Relations Council following its inception after the 1967 riots in Detroit. He was concerned with mental health issues, and was President of the Pontiac State Hospital Volunteer Group. Don and Barb loved spending their summers at the cottage they built on Lake Huron, near Goderich, Ontario, swimming, sailing, windsurfing and watching the sunsets. Don and Barb both retired from their teaching careers in 1984. They found a place in Florida near Don’s brother John, and soon bought the catamaran sailboat, Straycat. They spent years wintering on their boat, exploring the Bahamas, the inland waterways of Florida, and the Florida Keys. Their children and grandchildren enjoyed many cruises on Straycat over the years. Don and Barb had many lifelong friends from their youth, life in Holly, time overseas, the beach in Canada, and from their experiences cruising on their sailboat. They enjoyed traveling to visit friends, family, children and grandchildren, and were always ready for an adventure, especially if it involved "roughing it" or trying something they'd never done before, or better yet, introducing someone else to a new experience, preferably in an exotic and exciting place. Barb’s enduring interest in genealogy led to their visiting cemeteries in many states to photograph and take rubbings of the graves of ancestors. Don and Barb’s children all went on to careers in Education. Their loving marriage serves as a shining example of long-term commitment for all of us. Don is survived by his three children: Jo (Alan) Ingman of Fenton, Michigan, Scott (Sarah Seidman) Harrower of Middlesex, Vermont, and Lori (Bob Leahy) Harrower of Holly, Michigan; four grandchildren: Mariah (Andrew Buehler) Carlsen of Victoria, Canada, Corey (Kathryn Enright) Harrower, of London, England, Tara Ingman, of Istanbul, Turkey, and Devon (Jasmyn Lee) Ingman of Fenton, Michigan; five great grandchildren: Bella, Aliyah, Lucia and Ivy of Victoria, Canada and Hazel of London, England; nieces Jay Crane of Florida and Carol Burnham of Colorado and 4 nephews: Ian and Don Harrower of Florida, Gary Scott of California and Jeffrey Scott of North Carolina. Don was preceded in death by his brother, John Harrower. Donations in Don’s honor may be made to: Hartland Hospice 6211 Taylor Drive Flint, MI 48507 (or your local hospice) or to: Alzheimer’s Association, 25200 Telegraph Rd., Suite100 Southfield, MI 48033

` On July 12, 2017, Donald Roy Harrower, age 88, passed away at the longtime Harrower residence on Mackey Road in Holly, Michigan. Don was born in 1929 in Detroit, to Alex and Esther (Rossiter) Harrower. He was predeceased by his wife, Barbara,... View Obituary & Service Information

The family of Donald R. Harrower created this Life Tributes page to make it easy to share your memories.

Send flowers to the Harrower family.