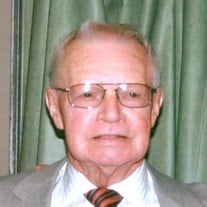 Donald D. Rodgers, age 90, of Holly, died Mon. Dec. 21, 2015. Funeral Mass will be celebrated at 11:00 AM Mon. Dec. 28, 2015 at St. Rita Catholic Church of Holly with Father David Blazek, Celebrant. Burial will be in Lakeside Cemetery, Holly with military honors under the auspices of Hulet-Bravender Post #5587 VFW and Amel Schwartz Post #149 American Legion. Visitation will be from 2-4 and 6-8 PM Sat. and Sun., with a Rosary prayed at 4:30 PM Sun. at the Dryer Funeral Home, Holly. Mr. Rodgers was born on Dec. 8, 1925, the son of Leo and Agnes (Lukaszewicz) Rodgers. He was a veteran of WWII, serving in the US Army. He was retired from GM and was a member of St. Rita Catholic Church. He was also a licensed pilot, a Holly Village Councilman for 16 years, one of the Founders of the Holly Volunteer Ambulance, a volunteer with Holly Project Pride, and an avid Detroit Tiger fan. Surviving are 3 children, Craig (Patti) Rodgers of Holly, Brian (Patty) Rodgers of Linden, and Terri (Ron) Monette of Holly; 6 grandchildren, Ellie (Joel) DuPuis, Haylee Rodgers, Allison (Ian) Haaseth, Logan Clark, Taylor Clark, and Alexandra Johnson; 2 great-grandsons Ian Haaseth and Isaiah Narducci; 3 brothers, Raymond Rodgers of Holly, Gene Rodgers of Fenton, and Steve (Edith) Rodgers of Holly; and sister Ileene (Bill) Shook of FL. He was preceded in death by his wife Barbara "Mert" Rodgers, grandson Joey Rodgers, and brothers Alvin and Richard Rodgers. Memorial donations may be made to St. Rita Catholic Church. www.dryerfuneralhomeholly.com

The family of Donald D. Rodgers created this Life Tributes page to make it easy to share your memories.

Send flowers to the Rodgers family.