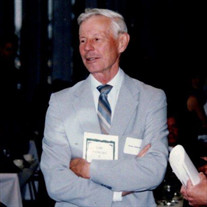 Duane Dean McKeachie was born on St. Patrick’s Day, March 17, 1926. He grew up in rural Oakland County with his parents, two brothers, and sister at the corner of McKeachie and White Lake Roads. Duane attended a powerhouse one-room country school during the Great Depression where his father taught the Three Rs to eight grades of the children of relatives and the many farmers who lived nearby. Duane also developed traits recognizable by many who would come to know him in the future: how to be genuinely interested in other people, the power of being a good listener, and how to be a good friend. He was unselfish, didn’t complain, and was not critical of others. Along the way he became an Eagle Scout. Duane attended Holly High School where he was a member of the varsity football, basketball, and baseball teams. He played a trumpet in the band and was an accomplished piano player. He had a singing voice like Nat King Cole and later sang at many weddings, public events, and with friends around the piano at parties. At 17, Duane graduated as valedictorian of the class of 1943. With America at War, Duane went to Ann Arbor to study mathematics and engineering at the University of Michigan. On weekends he played the string bass in a jazz band downtown or at parties on campus. On Saturdays in the fall he played his trumpet in the Michigan Marching Band under the direction of legendary conductor William D. Revelli. Duane and the band rode the train to Pasadena, California to perform in the 1948 Rose Bowl. He sang in the Choral Union and played on the baseball team in the spring. Duane enrolled in the Navy’s V-12 program and was training to be a damage control assessor on ships in the South Pacific when the War ended in August, 1945. He graduated from U of M with Bachelors and Masters degrees. In 1949 Duane was hired to teach Mathematics and Mechanical Engineering at General Motors Institute in Flint, Michigan (now Kettering University). Professor McKeachie was a distinguished educator, well-liked by students and his colleagues. He retired after 57 years – just past his 80th birthday. He retained a strong connection to Kettering throughout his remaining years. Duane married Joyce Gudith on June 2, 1951. They busied themselves raising two sons in Flint Township, playing bridge with other mathematicians and their wives, and attending Michigan football games. Duane attended every home game for nearly 70 years, as well as many away games. Duane participated in GMI golf and bowling leagues for many years. He shot in the low 40s and bowled in the 160s during his best seasons. Duane died on January 17, 2021 age 94 5/6 after bravely battling Parkinson’s Disease for several years. Duane is survived by, Joyce, his wife of nearly 70 years; his brother Mel; sons Phil and Bruce (Janette); grandchildren Ryan (Ashley), Stephanie (Mike), Andrew, and Heather; and great-grandchildren Reece, Bo, and Jase. Duane was preceded in death by his parents, Bert and Edith, sister, Joyce, and brother Wilbert. Duane McKeachie has left behind a legacy of what it means to live a life well-lived. His gifts of intelligence, kindness - and as an athlete and musician - will live on through his family, students, and peers. A public memorial service is anticipated sometime later this year. A private burial will take place this week at White Lake Cemetery with a handful of immediate family members.

Duane Dean McKeachie was born on St. Patrick&#8217;s Day, March 17, 1926. He grew up in rural Oakland County with his parents, two brothers, and sister at the corner of McKeachie and White Lake Roads. Duane attended a powerhouse one-room country... View Obituary & Service Information

The family of Duane Dean McKeachie created this Life Tributes page to make it easy to share your memories.

Send flowers to the McKeachie family.