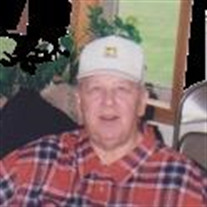 Earl R. “Buz” Bosley Jr., age 74, of Goodrich, passed away on November 9, 2018 in Holly, MI. Visitations and funeral service will be held at Dryer Funeral Home, 101 First St., Holly, MI 48442 Visitations will be held at 2:00 p.m. – 9:00 p.m., Tuesday, November 13th. Funeral service will be 11:30 a.m. (10:30 viewing), Wednesday, November 14th. A short service following at 1:00 p.m. at Great Lakes Cemetery. Earl was born in Detroit, MI to Earl R. Sr. and Mary Ann Bosley on November 17, 1943. He graduated from Berkley High School in 1962. He enlisted in the U.S. Navy serving proudly as a radioman 3rd class. He received an associate's degree in business from Macomb Community College. Retired, he was a dedicated regional salesman at Indramat Motors and Square D. He was a life member of the Clawson-Troy Elks Club. He enjoyed his family, cooking, watching war movies, traveling, hunting and being outdoors. He especially cherished his time camping with his wife and son. Earl is preceded in death by his parents and his son Keith. Earl is survived by his wife and soul mate of 55 years, Linda; brothers Mark (Susan), Scott (Lauren); sisters Shawn (John), Stacey, Bridgette (Michael); brother in-laws Brian (Carol), James and numerous nieces and nephews. Buz had a loving and generous spirit. He was well-loved by all who knew him. His happy personality and sense of humor was an inspiration to all who spent time around him. He is fondly remembered as “Uncle Buzzy” by his nieces and nephews.

The family of Earl R. Bosley Jr. created this Life Tributes page to make it easy to share your memories.

Send flowers to the Bosley family.