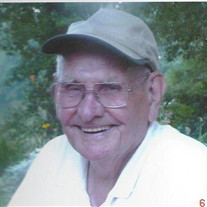 Elmer Wilburn Masingill, age 97, passed away on Mon. Sept. 2, 2019. He was born in Coushatta, Louisiana on Jan. 19, 1922 to Elmer Wolfson Masingill and Leona Sibley Masingill. In 1940, he enlisted in the US Army Air Corp which became the US Air Force, retiring after 28 years of service. During WWII, he was a Flight Engineer serving in Okinawa; during the Korean Conflict he served as a B-29 Flight Engineer; and he retired as a Sr. Master Sgt. in 1968 at Dover Air Force Base, Delaware during the Vietnam War. In 1943, he was married in Columbus, Mississippi to a lovely lady, whom he had met on a blind date. Freddie Mae Stephens was by his side for 66 years. He was a founding member of the First Christian Church of Bossier City, Louisiana, and together with Freddie, they taught Sunday school, participated in the choir, and hosted the youth group. They spent many years as Snowbirds in Florida, with summers spent on the Eastern Shore of Virginia. After Freddie died, he moved to Florida permanently, and began squiring a young lady of 85, Betty Striggow. They married, moved to Michigan and had a wonderful 9 years together. He told her he loved her every day, and when he married her, he inherited a whole other family who embraced him as their own. He became known as Grandpa Elmer, and he loved and was loved by them all. He is survived by his wife Betty; daughter Linda (Louis Alan) Barlow; step-children, Penny (Tom) Schettling and Debra (Daniel) Mikolowski; 3 grandchildren, Nina Lynn Carty, Danielle Mosher, and Shannon Rhae Barlow; 5 step-grandchildren; 22 great-grandchildren; and 1 great-great-grandchild. He was preceded in death by his wife Freddie Mae; son James Wilburn Masingill; granddaughter Jennifer Lynn Boutiette; brothers Frank and Bentley, and sister Eloise. Memorial services will be held at 5:00 PM Fri. Sept. 6, 2019 at the Dryer Funeral Home, Holly Michigan with Pastor Craig England officiating and military honors by the US Air Force. Visitation will be from 4-5 PM Friday. Memorial donations may be made to the Salvation Army. www.dryerfuneralhomeholly.com

Elmer Wilburn Masingill, age 97, passed away on Mon. Sept. 2, 2019. He was born in Coushatta, Louisiana on Jan. 19, 1922 to Elmer Wolfson Masingill and Leona Sibley Masingill. In 1940, he enlisted in the US Army Air Corp which became the US... View Obituary & Service Information

The family of Elmer Wilburn Masingill created this Life Tributes page to make it easy to share your memories.

Send flowers to the Masingill family.