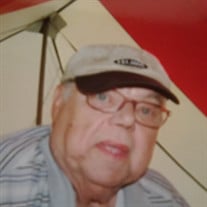 Eugene D. Worden Jr., "Beano, The King of Holly", age 75, of Holly, died Sun. April 23, 2017. Memorial service will held at 11:00 AM Sat. April 29, 2017 at the Dryer Funeral Home, Holly. Visitation will be from 10 AM until the time of the service. Mr. Worden was born in Flint on July 26, 1941 to Eugene and Joann (Niles) Worden. He loved his wife, family, kids, and grandkids, and he enjoyed gambling. He is survived by his 3 children, Jody (Heather) Worden of WI, Dawn Worden of Holly, and Timmy Worden of Holly; 8 grandchildren, Jacque, Cody, Shanna, Ruthie, Lilly, Ava, Tagarae, and Ryelee; 4 great-grandchildren; and many other relatives and friends. He was preceded in death by his wife Leona; his parents, and 3 brothers, Jerry, Ronnie, and Pork. www.dryerfuneralhomeholly.com

The family of Eugene D. Worden Jr. created this Life Tributes page to make it easy to share your memories.

Send flowers to the Worden family.