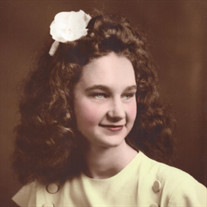 Frances Louise Warner, 90, of Holly, passed away on 12/30/2016 at home. A memorial service will be held on Friday, 1/20/2017 at 11:00 am at Calvary United Methodist Church, 15110 N. Holly Rd. in Holly with Pastor Cliff Schroeder presiding. Frances, known as Louise, was born in Arkansas to Warren and Laura Rowe on 7/9/1926. Louise and her sister, Lola were raised on a farm in Arkansas until Louise went blind at the age of 11. At that time, the family moved to Flint, Michigan so that Louise could attend the school for the blind in Lansing. After graduating, Louise took a position in Kansas working for the Goodwill Industry. She met future husband, Bob Warner. Bob had been in the service but contracted polio and ended up in an iron lung. Although Bob was confined to a wheel chair, he and Louise had a long fulfilling marriage helping each other to do all of the activities they enjoyed. Louise enjoyed knitting, cooking, gardening and listening to her talking book. She also loved children, especially Kristy Nickels and Joshua Nickels whom she baby sat from 5 weeks of age until they no longer needed a baby sitter. She was a wonderful, loving person who enjoyed beeper ball, canoeing, horseback riding, cross country skiing and tandem bike riding with her long- time friend, Marianne Nickels. Louise is preceded in death by her parents, Warren and Laura Rowe, her husband, Robert Warner and her sister, Lola Liberty. Louise is survived by (her nieces, Phyllis Liberty and April Pifher, and nephews, Rod, Mark, and Joe Liberty). Memorials may be given to Holly Youth Assistance (Robert Warner Scholarship) or Calvary United Methodist Church. www.dryerfuneralhomeholly.com

The family of Frances Louise Warner created this Life Tributes page to make it easy to share your memories.

Send flowers to the Warner family.