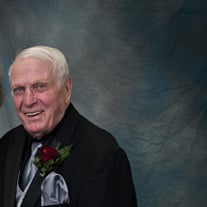 Franklin P. Allen Sr. age 87, of Holly, died, May 25, 2017. Funeral services will be held at 10:00 AM Tues. May 30, 2017 at the Dryer Funeral Home, Holly. Visitation will be from 2-9 PM Mon. Military honors and inurnment will be at Great Lakes National Cemetery, Holly. Frank was born in Little Rock, AR on Dec. 15, 1929 to Charles Howell and Flora Mae Irene Allen. Frank graduated from Valley View High School , Jonesboro, AR in 1950 after which he immediately enlisted in the Army Airborne Division. Frank fought in Korea where he was involved in the only 2 combat jumps of the war as a "Rakkasan". He was honorably discharged in 1953. Frank moved to Fenton, MI where he eventually met and married Catherine A. Temming. They settled in Holly building their family home on Quick Rd. He was a proud member of the Hulet-Bravender Post #5587 VFW of Holly where he served as Post Commander. Frank was preceded in death by his parents, his wife of 61 years Catherine A. Allen (May 2016), son Franklin P. Allen Jr. and sister Obbie Draper. He is survived by children, Melissa (Roger) Munnell, Heidi Allen, Heather (Matt) Robinson, Jon Allen, and Elizabeth (Matt) Charles; grandchildren, Kristen (Ryan) Knudson, Anthony Byard, Nicholas Byard, Caroline (Tyler) Sipes, Rachel Allen, Natalie Allen, Mitchell Charles, Cameron Charles, and Catherine Charles; great-grandchildren Carson, Carter, and Kinsley Knudson; one niece Victoria (Ron0 Davis and great-niece Sophia Davis. Memorial donations may be made to Holly VFW. www.dryerfuneralhomeholly.com

The family of Franklin P. Allen created this Life Tributes page to make it easy to share your memories.

Send flowers to the Allen family.