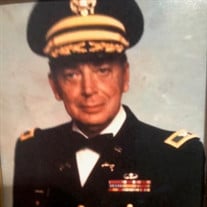 COL. FREDRICK A. CRUISE On a beautiful March day, surrounded by his loving family, Col. Fredrick (Fred) Cruise of Fairfield Bay, Arkansas and currently residing in Lake City, Florida, passed on quietly at the Haven Hospice Center in Lake City at the age of 88. He is survived by his loving wife of nearly 68 years, Betty; children Bruce (Denise) Cruise, Kathy (Steve) O’Dell, Tim Cruise and Cindy (Jim) Hunt, eight grandchildren and six great-grandchildren. He was preceded in death by his parents Fredrick S. and Gertha Cruise, his brother Donald Cruise and his son-in-law, Rick Kahler. Fred was born in Highland Park, Michigan in 1929 and attended Henry Ford Trade School in Detroit, Michigan. In 1949, Fred enlisted in the Marines and after completing his tour of duty, he joined the U.S. Army and was assigned to the XVIII (18th) Airborne Corp in Fort Bragg, NC. In 1952 he attended Officer Candidate School in El Paso, Texas and graduated a 2nd Lieutenant. Fred married the love of his life, Betty Pollock Cruise in 1950. In 1953, he joined the Army Reserves in Michigan where he continued to serve his country for the next 30 years, retiring as a full Colonel in 1983. Also in the private Sector, Fred became a corporate Vice President of AAA of Michigan. After retiring in 1983, Fred & Betty moved to Fairfield Bay, Arkansas. After the collapse of the Fairfield Bay Communities, Fred served as CEO and was instrumental in putting the Bay back on sound financial footing. Fred and Betty enjoyed many years in Arkansas and loved golfing. They won the mixed doubles in the State of Arkansas Golf Championship and were honored to compete in the finals in Orlando, Florida in the Oldsmobile Golf Tournament. The highlight of his and Betty’s love of golf was playing the St. Andrews course in Scotland. Fred enjoyed life, especially life with his energetic and growing family. He and Betty loved traveling the country especially their special “one at a time” grandchild trips. A late love, exercise partner and loyal companion was his dog, Lady. Above all, Fred loved and cherished his wife Betty. We will all miss him dearly. Funeral Services will be held on Sunday, April 2, 2017 at the Dryer Funeral Home in Holly, Michigan.Military honors and interment will be held at 2:30 PM on Monday at the Great Lakes National Cemetery in Holly, Michigan. Visitation will be from 2-5:30 PM Sunday. In lieu of flowers, donations are requested to be sent to Haven Hospice Center, 6037 W. US Hwy. 90, Lake City, Florida 32055 in his name.

The family of Frederick A. Cruise created this Life Tributes page to make it easy to share your memories.

On a beautiful March day, surrounded...

Send flowers to the Cruise family.