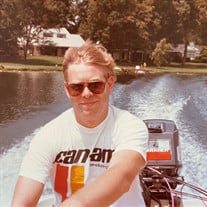 George Perkins Barton (Nov 1, 1946- January 31, 2021) George Perkins Barton passed peacefully away in his sleep in the early morning of January 31, after an 11-year battle with Lambert Eaton Myasthenic Syndrome, or LEMS. He lived 42 of his 74 years at his home in Holly, Michigan, where he was able to spend his last days with family. George was born on November 1, 1946 to John Titus and Ramona (Perkins) Barton. He was the third of four children. He spent his childhood in Montour Falls, NY, in the state’s Finger Lakes region, where his family split their time between their summer lake house on Cayuta Lake and their home in town. After graduating high school at Odessa Montour, George went on to pursue a bachelors in engineering at Cornell University in Ithaca, NY, from 1964-1968. He stayed at Cornell to earn his MBA between 1968 and 1970. George married Mary Ellen Young on June 20, 1970. Over the course of their fifty-year marriage, they raised four children, Deborah (Barton) Kay, Emily (Barton) Alford, George Barton and John David Barton. George was an active, proud father who was known for hosting tailgate parties at his children’s tennis and cross-country tournaments. He was fiercely proud of his children and could always be counted on to share stories of their latest activities. George’s life was led by his passions, of which he had many. As an engineer, he had a love of math, problem solving and all things mechanical, which he used professionally as an engineer for 30 years in the Detroit auto industry. At home and with friends, he was quick to share stories, trivia, and jokes- especially puns. He also loved sports, especially Michigan Football, where he spent years as a season ticket holder and faithful fan, as well as all the athletic teams of his alma mater, Cornell. His love of machines translated to a boatbuilding business in his early retirement years and a lifelong love of motorcycles. As a motorcycle enthusiast, George managed to travel to and ride in most regions of the United States during his lifetime. He was also a regular attendee of the Daytona Beach Bike Week and the Sturgis Motorcycle Rally. In later years, his passions also included traveling to see his kids and eight grandchildren, Breyer Kay, Ruhnar Kay, Alexis Alford, Owen Barton, Evan Alford, Orion Kay, Cam Barton and Fisher Kay. George is survived by his wife, children, grandchildren, his three siblings (Linda (Barton) Fosberg, John Edward Barton and Debbie (Barton) Keammerer), and their respective families. In lieu of flowers, the family is requesting donations be made in his name to the National Organization for Rare Disorders (rarediseases.org) or Holly Calvary Church (hollycalvary.org). Due to COVID restrictions a celebration of life will be held at a later date.

The family of George Perkins Barton created this Life Tributes page to make it easy to share your memories.

Send flowers to the Barton family.