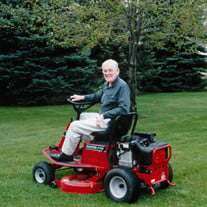 Harold Wayne Bylsma was born July 7, 1929 in Flint, MI and died on October 7, 2018 after 89 years of life. He was being treated for Multiple Myeloma. Harold grew up in Holly, MI and graduated high school from Adelphian Academy in Holly. After working a year in construction, he attended Andrews University (MI), Walla Walla University (College Place, WA), and ultimately graduated from the University of Michigan (Ann Arbor, MI) with a Bachelors degree in Civil Engineering. His first job was with the City of Highland Park, MI; He was drafted into the U.S. Army and served from 1955-57, spending time in France and other countries in Western Europe. He worked for several years on the planning and design team for Pacific Union College (Angwin, CA) and then held positions in various Detroit area private engineering firms before joining the U.S. Government Department of Housing and Urban Development in Detroit for the last 23 years of his career. Harold enjoyed an active retirement, beginning in 1994, with his wife Alma, whom he married in 1959, and was her caregiver for that last several years of her life. Harold was an unrelenting perfectionist in all that he did. He was artistic and appreciated beauty and good design. The “little things” mattered to Harold. He spent his spare time, and retirement years, gardening, picking fresh fruit with his wife Alma, baking, watching auto races and keeping the yard, flower gardens and house he and his father built in 1968 in good shape. Harold was preceded in death by his brother Dr. Glenn Wm. Bylsma (1926-2015) of Waynesville OH and his wife of 58 years, Alma Ruth Bylsma (1931-2017). He is survived by sons Wayne (Philadelphia, PA) and Wesley (Holly, MI). Funeral service at 12:00 noon, Dryer Funeral Home, Holly MI, preceded by visitation beginning at 11:00am on Wed. Oct. 10, 2018. Donations preferred in lieu of flowers to Holly SDA Church (hollysdachurch.org) or the Adventist Development and Relief Agency (adra.org). www.dryerfuneralhomeholly.com

Harold Wayne Bylsma was born July 7, 1929 in Flint, MI and died on October 7, 2018 after 89 years of life. He was being treated for Multiple Myeloma. Harold grew up in Holly, MI and graduated high school from Adelphian Academy in Holly. After... View Obituary & Service Information

The family of Harold W. Bylsma created this Life Tributes page to make it easy to share your memories.

Send flowers to the Bylsma family.