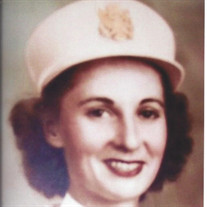 Helen Mary (Cosgrove) Gagel was born November 6, 1915 in Sauk Center, Minnesota. She was the third of six children born to Gladys and Lawrence Cosgrove. Her father farmed until 1928, sold their farm and moved to Pontiac, Michigan where her father obtained work at Pontiac Motors. Helen attended St. Frederick High School and graduated at the age of 17 in 1932. With a small inheritance from her maternal Grandpa Scott, Helen was able to attend St. Joseph Nursing College which is located on the premises of St. Joseph's Hospital in Pontiac. After graduating from nursing college Helen worked as an Obstetrics Nurse at St. Joseph Hospital until she joined the US Army . She held the rank of 1st Lieutenant and was stationed at Camp Polk, Louisiana where she met her future husband, Robert J. Gagel. He was a patient of hers, hospitalized with a serious ear infection, which led to his honorable discharge. Before they could marry, WWII broke out and Helen's stay in the Army was extended. She was assigned to the 49th General Hospital and sent to the Pacific Theater in Jan. 1944 along with hundreds of other nurses. She served 22 months in the Pacific Theater, including Australia, New Guinea and the Philippines. Helen was there with General McArthur's troops during the Battle of Manila, Philippines and was one of the first to treat US prisoners at Santos Tomas in Manila. She was awarded the Bronze Star for meritorious service. Once the war was over, Helen was honorably discharged and married Robert on June 6, 1946, at St. Michael's Catholic Church in Pontiac. Besides being a homemaker and mother to four children, she was a caretaker to her father-in-law, James Gagel, who lived with the family after his wife died in 1953. After Bob's father James died in 1975, the two moved to Pinellas Park, FL where Helen was a full time volunteer for The American Cancer Society. She was devoted to the Catholic Church and said rosaries every single day. In 2004, their oldest son, Scott also living in Pinellas Park, passed away, and Helen and Bob moved back to Michigan to be near their children and grandchildren. Her son Jim, and daughter-in-law Kim, helped care for both Helen and Bob with trips to the doctor's, grocery shopping, financial bookkeeping, etc. She loved to read murder mystery and crime novels. Helen developed macular degeneration and lost most of her central vision, but she still enjoyed her stories on audio books. Additionally, Helen made thousands of rosaries for various missions around the world, using their modest income to pay for supplies and postage. Shortly after celebrating their 70th Wedding Anniversary on June 15, Bob died July 12, 2016 at the age of 98. Helen then moved into daughter Kathie's home where she was lovingly cared for until it was determined that Helen needed full time nursing care. She was admitted to the Shelby Nursing Center for a few months until she died January 31st, 2018. Helen was preceded in death by her parents, Gladys and Lawrence Cosgrove, and four brothers, John, Cecil, Paul, Warren and her oldest son Scott. She is survived by her sister Catherine (Cosgrove) Hoover. She was the beloved mother of James Gagel (Kim), Katherine (Gagel) Stevens (Richard), Annemarie (Gagel) Weers (James). Beloved Grandmother to Robert Gagel (Asia), Craig Gagel, Tara Hambrick (Brad), Jeannie Costello (Richard), Rebecca Stevens, Tyler Weers (Stephanie), and Ryley Weers. Beloved Great-Grandmother to Kate and Abby Costello, Ethan and Owen Hambrick, and Nora Weers. Beloved Step-Grandma to Cody VanderKaay (Corinne) and Wrylie DeLong (Joseph). Beloved Step-Great Grandmother to Jordyn Guthrie, Joesey DeLong Chase and Skye Marshall, and Mazzee and Cyrus Vanderkaay. A Memorial Mass will be celebrated at 11:00 AM Tues. Feb. 27, 2018 at St. Rita Catholic Church of Holly. Military honors and inurnment will follow at Great Lakes National Cemetery, Holly. www.dryerfuneralhomeholly.com

Helen Mary (Cosgrove) Gagel was born November 6, 1915 in Sauk Center, Minnesota. She was the third of six children born to Gladys and Lawrence Cosgrove. Her father farmed until 1928, sold their farm and moved to Pontiac, Michigan where her father... View Obituary & Service Information

The family of Helen M. Gagel created this Life Tributes page to make it easy to share your memories.

Send flowers to the Gagel family.