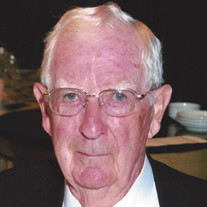 Jack Ellsworth Johnson passed away on Wednesday, April 30, 2014. He was born in Holly on March 24, 1930, to the late Frank and Bertha Johnson. Jack was a very active man, never wishing to sit still for anything. He spent his entire life in Holly, played on the high school basketball team, and graduated in 1948. He began working at a very young age at his dad’s, Johnson Super Service Station, which opened in Holly in 1935. They began selling cars shortly after opening. In 1948 a new dealership building was built and Johnson Motor Sales opened. In 1950 Jack married Patricia Mae Welch. After the passing of his dad in 1962, Jack and his sister, Freda Fuchs, became co-owners selling Pontiacs until 1986. Jack was active in the community with Kiwanis, loved golfing, hunting, fishing and especially snowmobiling. He could be found almost any morning at the Holly Donut Shop for decades. He will be remembered by many as the guy who sold you your first car, gave you your first job, knew you as a friend or as a “partner in crime” but most of all he was a gentle man who was a friend to everyone. He loved to tell tales about his adventures. Jack’s wife, Patricia, preceded him in death in 2006. He is survived by his only child, Gail (Bill) Anderson of Brighton, MI and his granddaughter Kaitlyn, as well as nieces Pat (Don) Walls, Kay (Ken) Pearce and nephew John (Margaret) Fuchs. He also leaves behind his sweetheart Carolyn Moyer. In keeping with his wishes, cremation has taken place. A Memorial Service will take place at Dryer Funeral Home in Holly at noon on Monday, May 5, 2014. Private inurnment will be in Lakeside Cemetery. Friends may call at the Dryer Funeral Home on Sunday, May 4 from 2 to 6 p.m. and on Monday from 10 a.m. until the time of the service. Memorial contributions may be made to the Kiwanis of Holly or Loose Senior Center of Linden.

Jack Ellsworth Johnson passed away on Wednesday, April 30, 2014. He was born in Holly on March 24, 1930, to the late Frank and Bertha Johnson. Jack was a very active man, never wishing to sit still for anything. He spent his entire life in Holly,... View Obituary & Service Information

The family of Jack E. Johnson created this Life Tributes page to make it easy to share your memories.

Send flowers to the Johnson family.