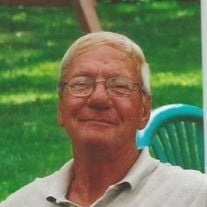 Jackie Glenn Armstrong, age 63, of Linden, died Sat. March 22, 2014. Funeral services will be held at 12:30 PM Wed. March 26, 2014 at the Dryer Funeral Home, Holly. Military honors and burial will be at Great Lakes National Cemetery, Holly. Visitation will be from 10:30 AM until the time of the service on Wednesday. Mr. Armstrong was born in Jonesboro, AR on Feb. 9, 1951, the son of Aubrey and Virgie (Wallace) Armstrong. He was a veteran of the Viet Nam War, serving in the US Marine Corp, and he was a member of the Curtis-Wolverton Post #3243 VFW of Fenton. He lived his life to the fullest and especially loved his grandchildren, and the Detroit Tigers. Surviving are 4 children, Angelia (Ron) Makin of Linden, Jackie (Jennifer) Armstrong II of Burton, Crystal (Robert) Crowe of Holland, MI, and Kevin (Tina) Armstrong of NY; 12 grandchildren, Jessica, Kyle, Justin, Calob, Samantha, Alexis, Kaylee, Kacie, Aubrey, Brianna, Brendan, and Ryan; and his sister Shirley Paris. He was preceded in death by his parents, and brothers, Buford and Buddy Gene. Memorial donations may be made to the Disabled American Veterans. www.dryerfuneralhomeholly.com

The family of Jackie Glenn Armstrong created this Life Tributes page to make it easy to share your memories.

Send flowers to the Armstrong family.