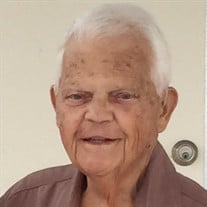 James G. (Bud ) Harlow, 86, of Holly, MI, passed away peacefully on March 20, 2017, following a very long, courageous battle with Cancer. His wife, Pat, was at his side, in Bradenton, FL. Bud was born on June 15, 1930, in Kansas City, MO, to Emily & James Harlow. Surviving are his wife of 25 years, Pat Harlow; daughter, Kristie (Bill) Plawinski, son, Kurt (Erin) Harlow; step-children: Karlene Lehman, Darrold (Trudy) Lehman, John (Jacquie) Lehman, Onna (Jim) Cross; a brother, Ned (Karen) Harlow and sister-in-law, Phyllis Wallis, 13 Grandchildren and 12 Great Grandchildren. Bud was preceded in death by his wife of 38 years, Barb Harlow. Bud grew up in Kansas City, MO, where he worked with his Dad & his Grandfather at “Harlow Foods” Grocery Store. He graduated from Missouri State University with a degree in Geology. In 1950, he met and married Barbara Reyburn, of Kent City, MI. Bud then served in the Army, during the Korean War. Following his service they moved to MI, where Bud started his 30 year career at Consumers Power, in the gas division. He was a Marketing & Energy Consultant, upon retiring, in 1998. Some of his favorite years, were when he ran the Training Center for Field Employees, in Jackson. He and Barb spent many of their married years travelling & camping throughout the U.S. & Canada, until her death in 1990. After he and Patricia fell in love and were married, in 1992, they found that they, too, had a passion for travel, when they began to venture around the world together. Over the next 20 years they travelled to all 7 continents . Two of Bud’s favorite sights were seeing the Pyramids of Egypt, and the wildlife and scenery of Antarctica. Bud will always be known for his love of swimming and the hours spent working on cars, trailers and motor homes. He helped many friends and relatives build homes, run electricity, and do plumbing. Friends and family will miss Bud and his “sage advice.” Visitation will be from 3:00-7:00 p.m. Sunday, March 26 at Dryer Funeral Home, Holly, A Funeral Service will be held at 9:00 a.m. on Monday, March 27 at Calvary United Methodist, Holly, where Bud has been a member since 1968. Burial will be at the Great Lakes National Cemetery at 10:30 a.m. on Monday. In lieu of flowers, donations can be made to the American Cancer Society. www.dryerfuneralhomeholly.com

The family of James G. Harlow created this Life Tributes page to make it easy to share your memories.

Send flowers to the Harlow family.