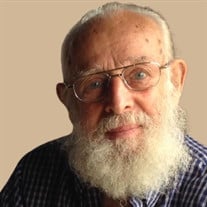 On Saturday, July 25, James Napierski, loving father, brother, uncle, grandfather and great grandfather passed away at Canterbury on The Lake in Waterford, Michigan at the age of 83. James was born in Pontiac, Michigan on September 9, 1936... View Obituary & Service Information

The family of James Joseph Napierski created this Life Tributes page to make it easy to share your memories.

Send flowers to the Napierski family.