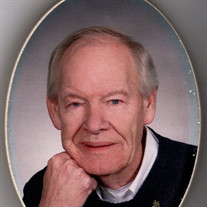 James Oran Reid, 83, of Holly, passed away June 22, surrounded by his loving family. He was born in Rock Hill, SC, to William Macklin and Maggie (Rainey) Reid. Deeply loved husband of Sharron (Long) to whom he was married for nearly 60 years. In addition to his wife, Jim leaves three daughters: Linda (Larry) Avery of Illinois, Angela (Ed) Robak of Holly, and Elizabeth Bidinger of Massachusetts; grandchildren Adam, Amanda, Daniel, Lauren, and Lily; and a great-granddaughter, Maeve; brother Melvin (Janet) Reid; brother in law Virgil (Betty) Long; sister in law Pam (Paul) Liscom; and numerous nieces, nephews and friends. Jim had a long career in the sand and gravel industry. He designed several sand plants and he was the principal inventor and designer of an innovative system for cleaning industrial paint drums, which was awarded a patent. Throughout his life, Jim was an accomplished guitarist who was regularly asked to perform at area churches and other community events. He was recognized by musicians across Michigan for his exceptional five-finger style and his expert covers of several Chet Atkins’ masterpieces. The childhoods of his children and grandchildren were permeated by the sound of Jim playing Black Mountain Rag, Cannonball, In the Mood, Via Con Dios, and other melodies that kept him challenged. His wife, Sharron, recalls that when he was in his 20s, they saw the movie Dr. Zhivago and he went home and immediately began to teach himself “Lara’s Theme “; he persisted until he could play it flawlessly. Jim was an abundantly skilled man who could arrange a piece of music, solve a complex engineering problem, and build or fix about anything. In his later years he was most proud of his long marriage, his daughters, and his exceptionally close and loving relationships with his grandchildren. Visitation will be from 1-4 PM with a Memorial Service following at 4:00 PM on Fri. June 25, 2021 at the Dryer Funeral Home, Holly. www.dryerfuneralhomeholly.com

James Oran Reid, 83, of Holly, passed away June 22, surrounded by his loving family. He was born in Rock Hill, SC, to William Macklin and Maggie (Rainey) Reid. Deeply loved husband of Sharron (Long) to whom he was married for nearly 60... View Obituary & Service Information

The family of James Oran Reid created this Life Tributes page to make it easy to share your memories.

Send flowers to the Reid family.