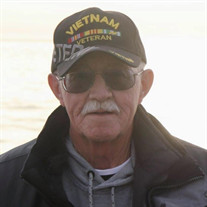 James David Wilson Jim, a loving father to Toni and his dogs, Mya, Nisha, and Max, succumbed to Diabetes on Sunday, November 7th, 2021. He was born July 20, 1948 at Lansing Sparrow Hospital to Marvin and Mary Wilson. Jim was educated in Clawson for his elementary and junior high, before graduating High School from Cassopolis High School. Shortly after graduating, Jim broke his right femur in a water-skiing accident. He endured having his leg in traction and then a body cast for six months. Unfortunately, his leg didn’t heal correctly, so the doctors inserted a steel rod to solidify the femur. When the leg healed, Jim tried to enlist in the Navy. The Navy rejected him due to the steel rod in his leg, along with poor eyesight and limited lung capacity. Three weeks later, Jim received but didn’t open his draft notice from the Army. He took that to the Navy recruiter who changed his mind and Jim attended Great Lakes Naval Station. After graduating, Jim was stationed in South Carolina, Hawaii, and off the coast of Vietnam. Jim was always thrilled with speedboats. He bought a Steury and made it one of the fastest on Diamond Lake in Cassopolis. He traded the boat for a hydroplane that needed some work. Jim fixed it up and the took it to local lakes near Pontiac. When he took off the muffler, it would go 100 mph flames coming out the exhaust, breaking all sound ordinances. Jim took his love of boats and craftmanship to work at Sea Ray Boats in Oxford, Michigan. During his years there, he met and fell in love with Carol who would become his wife, married on a dock. Jim and Carol gave birth to Toni Michelle. Jim left Sea ray to work at General Motors in Pontiac and Iowa, before working at Jabil. At every job, his bosses loved his dedication and quality of work. In 1985, Jim and Carol purchased a home on Blue Water Drive in Holly. He became friends with everyone in the neighborhood He mowed their lawns, plowed their driveways, and helped on many home improvements projects. After Carol died, Jim bought an historic hydroplane and named it after Carol, he spent hours restoring the boat and running it on White Lake, and many other lakes near it. Jim also purchased two AKC German Shepherd Puppies, Mya, and Nisha. The latter gave birth to a boatload of puppies, including Max who would become his pal, accompanying Jim on many trips to the grocery store, drug store, bank etc. Jim was preceded in death by his wife Carol, his grandchildren Ricky and Veronica, his parents Marv and Mary Wilson, and his youngest brother Keith. A gravesite ceremony will be held on Saturday, November 13th at 11:00 am at Ottawa Park Cemetery in Waterford. A reception will be held from 1:00-3:00 at Jim’s home at 484 Bluewater Drive, Holly Michigan. If you wish to make a contribution to honor Jim’s life, please consider donating to the SemperFiFund which helps veterans from all branches of service at www.semperfifund.com. www.dryerfuneralhomeholly.com

James David Wilson Jim, a loving father to Toni and his dogs, Mya, Nisha, and Max, succumbed to Diabetes on Sunday, November 7th, 2021. He was born July 20, 1948 at Lansing Sparrow Hospital to Marvin and Mary Wilson. Jim was educated in Clawson... View Obituary & Service Information

The family of James David Wilson created this Life Tributes page to make it easy to share your memories.

Jim, a loving father to Toni and his dogs,...

Send flowers to the Wilson family.