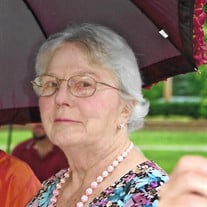 Jean Shirley Brendel (Orr) entered eternal life on October 11, 2021, where she passed peacefully in her home of 73 years at the age of 95. Born September 2, 1926 in Rose Center, eldest daughter of 3 to Allen and Helen Orr. Jean was a hard worker from an early age, helping to run the family farm from picking potatoes to running the team of horses that pulled the hay wagons. She graduated from the Goodrich Rural Agricultural School in 1943, at the age of 16. After high school, Jean supported the war effort working for Bell South as an operator and at Pontiac Motors building war ammunition alongside many other women. Jean married William Carl Brendel of White Lake in 1945. They purchased their home in White Lake where they raised three daughters, Heather, Wendy and Shana, and farmed for more than 50 years. After her husband, William (Bill) Brendel passed in 1972, Jean continued to run the family farm for over 20 years on her own. She not only managed the beef business but also grew corn and wheat plus harvested hay and maintained the farm equipment. Her strength and integrity is recognized by all who knew her. Jean enjoyed both flower and vegetable gardening plus interior decorating for which she was featured in the Oakland Press’ Homescape section in the August 26, 1972. Jean was a loving daughter, sister, wife, mother, grandmother, aunt, cousin and friend that will be missed. We are incredibly blessed to have the joy of Jean in our lives for so many years, and will treasure the love, memories and the invaluable lessons and teaching she gave so generously. Jean will be in our hearts and memories which we will hold dear as we celebrate her incredible life and rejoice knowing that she is at peace in Heaven.. Jean is survived by daughters Wendy (Lew) Fadale and Shana Brendel; grandchildren Autumn Langley (Wendy), Taylor and Brock Morris (Shana) and Emily and Will Wachholz (Heather), as well as many loving nieces, cousins and friends. She was preceded in death by her husband William Brendel and daughter Heather Brendel-Wachholz. www.dryerfuneralhomeholly.com

Jean Shirley Brendel (Orr) entered eternal life on October 11, 2021, where she passed peacefully in her home of 73 years at the age of 95. Born September 2, 1926 in Rose Center, eldest daughter of 3 to Allen and Helen Orr. Jean was a hard... View Obituary & Service Information

The family of Jean Shirley Brendel created this Life Tributes page to make it easy to share your memories.

Send flowers to the Brendel family.