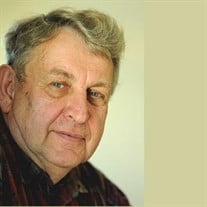 Jerry Donald Laatsch, age 80 of Holly, MI died Sat. April 6, 2019. The funeral service will be held on Wed. April 10, 2019 at 12 noon at The Dryer Funeral Home, Holly, MI with burial at All Saints Cemetery, Waterford Twp., MI. Visitation will be on Tues. April 9, 2019 from 1-3pm and 5-7pm. Jerry was a loving father and husband of 60 years. He was married to Roberta Luanna Travis on January 24, 1959. They met at a once famous spot on Woodward Ave. called Ted's where he would cruise up and down Woodward in his convertible black 1958 Impala with a continental wheel. Jerry was the father of 3 children; Daniel, James and David, grandfather of four; Ryan, Tyler, Chelsea and Victoria and he is survived by his siblings; Mary Lee, David, Jeff and Dawn. Jerry was born in Waupaca, WI on May 17, 1938 to his father Clarence Laatsch and mother Evelyn Laatsch (Roloff) who died when Jerry was only 3 years old. He was raised on his grandfather Shultz's farm in Clintonville, WI where the "farm bug" was planted. He worked early in the morning and at night tending milk cows, the milk was sold to the local cheese factory in Bel Plaine, WI. Jerry graduated high school a year early at the age of 17 then came to Michigan in 1955 and worked in his father's radio and television store. He went to the Electronics Institute in Detroit at night time to earn a certificate in electronics technology. Jerry went on to become part owner of Obel TV in Pontiac, later went on to open his own store with his wife Roberta in Holly named Village Electronics, where he sold and serviced TVs, radios and other electronics for 56 years before retiring. Farming was entrenched in him from his days in Wisconsin and in 1976 they moved to Holly (Rose Township) where they purchased 10 acres of land and built their house, of course farm house style and with plenty of land to grow many different types of crops. At times us kids were less than thrilled with his enthusiasm to plant SO much at times, but it provided plenty for the family and really installed a work ethic. He loved to travel back to his roots in Wisconsin to visit family members and he liked motor homes so he bought a 1974 Winnebago where we had many days of fun going nearly everywhere. www.dryerfuneralhomeholly.com

The family of Jerry Donald Laatsch created this Life Tributes page to make it easy to share your memories.

Send flowers to the Laatsch family.