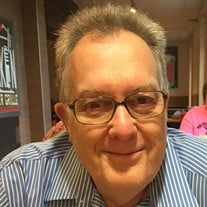 Jesse Jefferson “Jeff” Miller, Jr. died on February 9, 2018. He was 70. Jeff was born July 12, 1947 in Hartselle, AL to Jesse J. and Mary (nee Riddle) Miller. After a job brought the family to Michigan, Jeff graduated from Emmanuel Christian School, completed a bachelor’s degree at Oakland University, and earned his MBA from Walsh College. Jeff worked for many years as a banker, financial advisor, and life insurance salesman in Genesee, Oakland and Livingston counties. On July 29, 1972, Jeff married Janice Eva Taylor. Throughout their marriage, they partnered to mentor married couples and teens, teach Bible studies and volunteer at various churches, and run an in-home adult foster care in Holly, MI. Jeff and Jan raised three children and six adult foster children. It was their deep love to care for others. Jeff was active for many years in the Holly area. He loved community theater and played various roles in stage productions, in addition to being an active participant for many years in both Carry Nation Festival and Dickens Old Fashioned Christmas. He was well known for his sense of humor. Jeff loved local politics, serving on various boards and committees, and as Village Council President. Above any other title, Jeff’s identity was that of child of God. He loved and was loved by Jesus who faithfully walked with him throughout his life, especially through his journey with dementia. His love of hymns, opera music and Alabama football stayed with him until the end, still saying “roll, tide, ROLL!” to his caregivers. Jeff is survived by his daughter Jennifer (Matt) Hein of Ypsilanti, MI and son Matthew Miller of Warren, MI; sister Norma Walker of Tennessee; brother Mike (Melanie) Walker of Alabama; and four grandchildren. He is preceded in death by his wife, Janice; son, David Morgan Miller; sister Virginia (Clyde) Tucker; and his parents. A memorial service for Jeff will take place at 11am on Thursday, February 15 at Calvary United Methodist Church in Holly, MI, with a visitation from 9-11am, and a luncheon immediately following service. In lieu of flowers, memorial donations may be given to Hospice of Michigan, Calvary United Methodist Church (Holly), or St. Luke Lutheran Church (Ann Arbor). www.dryerfuneralhomeholly.com

The family of Jesse Jefferson Miller Jr. created this Life Tributes page to make it easy to share your memories.

Send flowers to the Miller family.