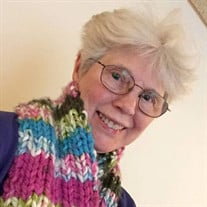 Judith Lee Fisher, age 74, died Monday August 27, 2018. Funeral Mass will be celebrated on Saturday, September 15 at 11:00 am at St. Rita’s Catholic Church., Holly. Visitation will be from 10:00 until the time of the funeral at the church. Judith was born on May 14, 1944 in Toledo Ohio, the daughter of James and Grace (Smith) Alcorn. She graduated from Mumford H.S. in 1962 and attended Northwood College, Central Michigan University, and graduated from University of Detroit in 1968. Judith married Marvin Fisher on July 20, 1974. She was proud to have worked for Saks Fifth Avenue, Detroit Free Press, Detroit Edison and a literary agent. Jude sang in the church choirs (St. Jude’s & St. Rita’s). In retirement, Judith earned a degree in library technology and joined the Friends of the Cromaine (Hartland), Holly and Fenton libraries. In addition, she enjoyed genealogy, and was a member of the Daughters of Union Veterans of the Civil War. She is survived by her husband, Marvin, sister Dee Mayfield of Lodi CA, daughters Louisa Summers of Berea KY, Kimberly (Joe Barkman) Fisher of Royal Oak MI, two grandchildren, Mika and Heidi Barkman, niece Dotti Mayfield of Lodi, CA, and nephew Christopher Mayfield of South Lake Tahoe, CA. Tributes may be shared at: https://www.dryerfuneralhomeholly.com/m/obituaries/Judith-Fisher-4/Memories

The family of Judith L. Fisher created this Life Tributes page to make it easy to share your memories.

Send flowers to the Fisher family.