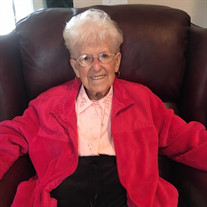 June Virginia (Gurden) Wiles "Grandma June", age 96 of Linden previously of Holly, died Nov. 30, 2017. Born in Royal Oak, Michigan on April 14, 1921. She was the youngest child of Romain and Melba (Wood) Gurden, her brother was Marvin Gurden, and sister was Madeline Gurden-Vick. She was a 1939 graduate of Holly High School, and attended the alumni banquet as the oldest living alumni through last year, of which she was very proud. She also loved attending her "class reunions" monthly, of which she was one of the last four living from the high school class of 1939. June married the love of her life, Forest Wiles of Byron, Michigan on June 6, 1941 and they were married 58 years until his death in 1999. June lived in Holly most of her life, with a short time living in Milford as a child. She worked as the manager for the downtown Holly Kroger store after high school, until becoming an executive secretary for General Motors which is a job she held until the birth of her only daughter, Patti Lynn, in 1955. In the years that followed, June worked in the Holly Area School system as a playground supervisor at Holly Elementary School and the lunch room supervisor at the Mable D. Bensett Middle School. Eventually she became a Holly School bus driver. June was very active as a Girl Scout leader for many years, including a few years of being camp director at the Oakland County Girl Scout camp that was located in Davisburg. Starting in 1981, she was a huge helping hand at Silver Spray Sports in Fenton, in the early years especially, as her daughter Patti and her husband, Jeff Smith, built the business. Most of all, she loved becoming "Grandma June" in 1987 when her only granddaughter, Whitney Smith-Burnash was born. She is survived by her daughter Patti (Jeff) Smith, and Granddaughter Whitney (Kyle) Burnash. She was preceded in death by her husband Forest, her sister Madeline Vick, her brother Marvin Gurden and her parents. Visitation will be Sun. Dec. 3rd from 6-9 PM and funeral services will be Mon. at 11 AM with Pastor Mike Anderson officiating at the Dryer Funeral Home, Holly. Burial will be in Lakeside Cemetery. Memorial donations can be made to Adopt-A-Pet of Fenton.wwwdryerfuneralhomeholly.com

The family of June Virginia Wiles created this Life Tributes page to make it easy to share your memories.

Send flowers to the Wiles family.