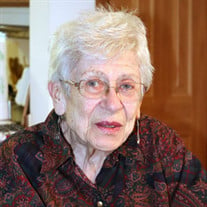 Fleckenstein Miller, Kathleen Anne (Kay), of Linden/Lake Fenton/Holly, age 82 passed away Thursday, March 18, 2021 due to the complications of dementia. She was born Katalin Cselenyi January 31, 1939 at St. John Hospital in Budapest, Hungary, the fourth child and only daughter of Antal and Margit (Pajor) Cselenyi. The Cselenyi family led a comfortable life in their beloved homeland before events related to the impending Communist takeover forced the family to flee. After spending nearly four years in Austria and Germany as refugees, the family made their way west and settled in Humberstone/Port Colborne, Ontario, Canada in 1948, reclaiming the family name of Zimmer. Kay attended Notre Dame College School in Welland, Ontario, graduating with the class of 1957. She and Joseph Fleckenstein Jr. married May 3, 1958 and settled in the Flint area after Joe’s service ended with the US Army. While pregnant with her third child, she became a United States citizen, realizing that she “was raising little Americans, I ought to become one!” She did so proudly, yet still retained some Canadian traditions (colour, zed, and serviettes, to name a few). In 1968, the Fleckenstein family moved to Holly, where Joe and Kay opened a Ben Franklin store and operated it until 1984, when Joe’s health began to decline. He passed away in 1988. Kay married Bill Miller in 1989 and shortly after moved to Lake Fenton. She loved living on the lake, but hated the water! She and Bill enjoyed a whirlwind nine years, traveling all over the world, most notably Alaska, Austria, Hungary, and Russia, until Bill’s death in 1998. Kay was an accomplished seamstress and a talented needlework artist. She could knit, crochet, embroider, and quilt. Many family members and friends have been the beneficiary of her talented handwork. She was a remarkable cook, and enjoyed sharing the Hungarian food traditions. She also loved animals of all kinds, and was a dedicated and caring pet owner her entire life. Surviving Kay are her children: Belinda and Scott Wright, Lucinda Fleckenstein and Karen Elliott, Joseph and Kristine Fleckenstein, Michael Fleckenstein, and Christopher Fleckenstein and Janet Carte; her grandchildren: Rachel and Kyle Wermers, Sarah and Jeremy Dobes, Brittany McKenney, Bradley Fleckenstein, Kyle Fleckenstein, Leyna Fleckenstein, Michael Fleckenstein Jr., Madison Fleckenstein, Meghan Fleckenstein, David Carte, and Alexa Carte; her great-grandchildren: Ariel, Blake, Maya, and Ladd Wermers, and Piper Dobes. Also surviving are her sisters-in-law Phyllis Zimmer and Connie Zimmer, and cousins by marriage and dear friends Jack and Jan Miller. She leaves many nieces, nephews, and cousins in the US, in Canada, and in Hungary. She was predeceased by husbands Joseph and Bill, parents Anthony and Margaret Zimmer, and brothers Frank Zimmer, John Zimmer, and Leslie Zimmer. The family would like to acknowledge and thank the caregivers who enriched our Mom’s life in her last year: Deb and Tina of RAH Genesee County, and the entire staff at Linden Square Assisted Living, especially Sydney, Tayler, Allie, Jonny, Diane, and Ty. If desired, the family would appreciate donations in Kay’s honour to the Humane Society of Genesee County. Funeral Mass will be celebrated at 12:00 Noon, Mon. Mar. 22, 2021 at St. Rita Catholic Church of Holly with Father David Blazek, Celebrant. Burial will be in Lakeside Cemetery, Holly. Visitation with social distancing restrictions will be from 2-9 PM Sun. at the Dryer Funeral Home, Holly. www.dryerfuneralhomeholly.com

The family of Kathleen Anne Fleckenstein Miller created this Life Tributes page to make it easy to share your memories.