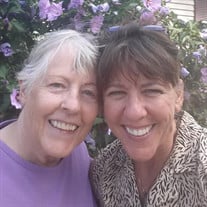 Laurie Helen Reisenauer passed away peacefully in her home in Holly, Michigan on July 19, 2021 at the age of 83. Laurie was an only child, born to her beloved mother, Helen Amelia Allinger and father, Benjamin James. She had an amazing childhood roaming the Rocky Mountains with her many cousins, of which Jody Jacobshagen was like a sister to her. She married the first love of her life, Gerald Reisenauer, on June 9, 1956. They raised three amazing children, Pamela Ruth, Gary Patrick and Sharon Laurie in Kenosha, Wisconsin. Laurie spent her early years as a traditional homemaker. She enjoyed sewing and would often give her crafts to those in need. Laurie grew beautiful flower gardens and freely shared her green thumb tips. Laurie met many people who quickly became friends before retiring from Jockey International in Kenosha where she supervised the sample department. After Gerald passed away in 1993, Laurie enjoyed going to Dinner theater events with her sister-in-law, Dorothy Reisenauer Thomas. In 1998 Laurie left Kenosha to join her youngest daughter, Sharon, in Holly, Michigan where she was blessed to meet the 2nd love of her life, Leonard Bentley, and gained the love of Leonard’s 3 beautiful children, Jeff, Kimber and Jodi. Together Len and Laurie had 23 wonderful years together. Laurie loved her afternoon rides through the country and spending time at home with her cats and also with the help of Barb Stilwell, Laurie was welcomed into the Holly Dollies Red Hatters. Laurie is survived by her companion of 23 years, Leonard, son Gary (Rachelle) daughter Sharon (Brad Stilwell). Son-in-law James Zahringer, sister-in-law Dorothy Reisenauer Thomas. Jeff (Krista) Bentley, Kimber (Bruce) Marshall, and Jodi (Mike) VonWihl. A beloved grandmother to April, Brian (Amber), Amy and Jeremiah (Ali), Amber, Mathew and Adam. A great- grandmother to Gerald, Ashlee (Cody), Patrick, Autumn, Rodrigo, Jaime, Luis, Isabella and Maddox. A great great grandmother to Enzo, Isabelle, Everlee and another on the way, Sophia. Special nephews and niece Daniel, Colleen and Jeff. She was preceded in death by her husband Gerald and daughter Pamela Zahringer. According to Laurie’s wishes no services will be held. Memorial donations to the Michigan Humane Society.

Laurie Helen Reisenauer passed away peacefully in her home in Holly, Michigan on July 19, 2021 at the age of 83. Laurie was an only child, born to her beloved mother, Helen Amelia Allinger and father, Benjamin James. She had an amazing childhood... View Obituary & Service Information

The family of Laurie Helen Reisenauer created this Life Tributes page to make it easy to share your memories.

Laurie Helen Reisenauer passed away peacefully in her home in...

Send flowers to the Reisenauer family.