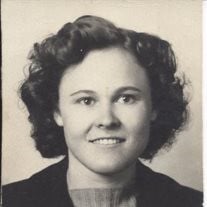 Margaret Georgia (Neal) Stewart, born April 25, 1924, passed away in her sleep on March 26, 2014, at her home in Holly, Michigan, just short of her 90th birthday. Visitation is on Sunday, March 30, from 2:00 p.m. through 9:00 p.m., at the Dryer Funeral Home in Holly. Services will be held there on Monday, March 31, at 1:00 p.m. Margaret, the third-born child of Nenon & Annie (Evans) Neal, was born on a cotton farm northwest of Hope, Arkansas, at the Crossroads community. Margaret lived on the Neal place at Crossroads until she was nine years old. She attended the Bright Star and Guernsey schools near Crossroads. In 1934, Margaret and her parents moved to northeast Arkansas near Blytheville and in 1936 to their southeast Missouri cotton farm north of Pascola. It was there in Missouri that she attended Deering High School and graduated from Wardell High School in 1944. After high school, Margaret attended college at Southeast Missouri State Teachers College, now Southeast Missouri State University, in Cape Girardeau. After college, she returned to the farm to teach grades 1-8 in the nearby town of Peach Orchard. While teaching, she met a young soldier, Rex Stewart, who was visiting relatives nearby. They soon fell in love and married on August 3, 1946. Then in 1948, knowing that jobs were available in Michigan, Margaret resigned her teaching position; she and Rex then moved to Holly, and Rex worked in nearby Flint at General Motors’ Fisher Body Plant. In the following years, Margaret worked jobs as a nurse’s aide and for Avon Products; but most notable, she was a beloved long-time caretaker for children of two special families: the Cooks and Foleys. Along with her outside work, she took pride in being a homemaker, wife, and mother. Margaret and Rex lived most of their lives in Holly. Feeling they desired to enrich their lives, they decided they needed children with whom to share their love; subsequently, they adopted and raised two children—Linda (Stewart) Hill and Donald Stewart. Linda preceded Margaret in death in 2008; and Rex preceded Margaret in 1992. Her older sister, Lois, passed away in 2003. These were all sad times in Margaret’s life; however, during the losses of her husband, her daughter, and her sister, she remained strong through the help of her beloved Seventh Day Adventist Church of Holly, where she had many friends who loved her and who mourn her passing. Her son, Don, moved from Fort Myers, Florida, last May to supervise her care and give her loving comfort. All who knew him will agree that her last months were enriched by his presence. She craved knowledge, enjoyed reading, family reunions, and discussing family history with her siblings. She loved to laugh and have fun, take short trips, and eat out with her good friends, in particular at Fenton’s “French Laundry.” She was a unique, very intelligent, and proud person whom all knew and appreciated. She was thought of as one with a sweet, honest, and open personality, who was an accomplished listener, and who empathized, sympathized, and/or prayed with friends who came to her with special problems. In the summer, one could find her in either her vegetable or flower garden; in the winter, one might catch her doing her daily Bible reading, or watching her favorite television shows of “Jeopardy,” “Wheel of Fortune,” or “America’s Funniest Videos.” She enjoyed life and conversations with her many friends, including the Hollyhock Senior Citizens Club; and she especially enjoyed her church family for whom the entire Neal and Stewart families are grateful. She enriched the lives of all whom she touched, was a true friend, and will be greatly missed by all she leaves behind. She was a member of the church “flower committee” and for many years arranged for flowers to be sent to the grieving; now it is her turn to receive her eternal flowers. A huge void fills the hearts of us who loved her. Margaret is survived by her son, Donald, of Holly; two grandchildren, Shaun Stewart of Sarasota, Florida, and Sharlene Stewart of Marietta, Georgia; and three great grandchildren. She is also survived by the remaining five of the seven siblings: Ina Neal Bryeans of Blytheville, Arkansas; Wesley Neal, Kansas City, Kansas; Wayne Neal, Antioch, California; Patricia Neal Harp, Springfield, Missouri; and Joy Neal Brown of Springfield, Missouri; and many nieces, nephews, and cousins. www.dryerfuneralhomeholly.com

The family of Margaret G. Stewart created this Life Tributes page to make it easy to share your memories.

Send flowers to the Stewart family.