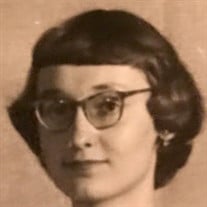 Marian Czurylo of Holly, Michigan departed July 2, 2017 at age 87. Daughter of Alfred and Pearl Zink, born on April 6, 1930 with twin Margaret, sister to Paul and George, dear wife of 54 years to Florian Czurylo, all previously deceasing her. Beloved mother of Suzanne and Sandra and their husbands Michael and Chris, and loving grandmother to Alexander, Ella, and Selene. Marian was raised in Frankenmuth and graduated from Arthur Hill High School in Saginaw. Marian valued education and worked her way through college waitressing at Zehnder's. She earned her degree from Eastern Michigan University in Library Science and worked first in East Detroit in the days when they shopped downtown at Hudsons in gloves and pearls and heels. She moved to Holly in 1957 upon marriage to Florian Czurylo, whom she had met at a picnic on Belle Isle. She worked as a Holly High School and elementary school librarian from 1957-1968 where she enjoyed the humor of the high school students in the library study hall and later building the children's book collection. With Florian and her parents she camped and canoed around Michigan. They enjoyed living on a hilltop on Houser Road with their Weimaraner Spook and hosting their dear nieces and nephews for many years before having two daughters of their own. Marian was a second mother to those who needed her. She kindly cared for many animals and wild birds and left behind four cats who will also greatly miss her. She helped Florian grow and sell flowers for their summer business with her brother, Fair Lake Greenhouse. They spent many winters in Clearwater, Florida. She enjoyed her golden years living independently (with the loving help of her assistant Carlene). She remained mentally sharp and intellectually engaged, and was happy and in good spirits the day she suddenly passed away from a serious fall, which appeared to be without any conscious pain. Marian's generosity to those around her and to many charities, and her perspective from her love of reading, ideas and conversation will be greatly missed. Memorial dinner this weekend at Zehnder's in Frankenmuth followed by a dove release - contact family for more information at (248) 634-3419 or (810) 626-8663. Graveside dedication on Monday from 2:30-3:00 p.m. at Great Lakes National Cemetery for internment with her husband Florian.

The family of Marian Czurylo created this Life Tributes page to make it easy to share your memories.

Send flowers to the Czurylo family.