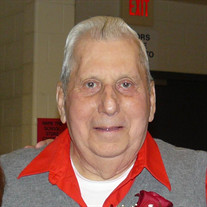 Maurice F. Pearson, age 86, of Holly, passed away on Feb. 10, 2016. Funeral services will be held at 11:30 AM Fri. Feb. 12, 2016 at the Dryer Funeral Home, Holly, with Pastor Cliff Schroeder officiating. Military honors and burial will be at Great Lakes National Cemetery, Holly. Visitation will be from 2-5 and 7-9 PM Thurs. Mr. Pearson was born in Holly on July 11, 1929, the son of Joshua and Mae (Smith) Pearson. While at Holly High School he played football and was a member of the ROTC. After High School in 1947, he was offered an apprenticeship with a local plumbing company and later worked construction. In 1948 he began a 39-year career with Ford. With the war in full swing, he took a leave from Ford and served in the United States Marine Corp from 1950-1953. He was stationed at Paris Island, SC and a few other places, before heading to the Pacific. Before his military career ended, he had earned the rank of Sergeant. He married Sue Patterson on Aug. 24, 1952. Maury (Sarge), has been actively involved in the Holly Area Community since the early 50's. He umpired little League from 1959-64, was the Cub Scout Master from 1960-68, head usher at Calvary United Methodist Church from 1985-2003 and a member since 1952. His family was chosen Holly's family of the year in 1986. Sarge is a member of the Holly American Legion and served as post Commander in 1988 and 1989. He was also a member of the Holly Veterans firing squad. He was a Guide for UAW Local 898 for 27 years. In addition, he was honored for 50 years of service to the Holly Athletic Department and was inducted into the Broncho Hall of Fame. He began volunteering in 1961. Since those early days, Sarge has been willing to do anything for the coaches and student-athletes of HHS. He held the office of Booster President from 1968-1975 and was named Booster of the year in 1975. For the last 13 years you could find Sarge in the ticket booth at the Karl Richter Campus, teasing and pleasantly harassing the kids and all who entered the gate. Maurice is survived by his loving children Josh (Joice) Pearson, Judy (Matthew) Johnson, and Jim (Joyce) Pearson; 3 grandchildren, Kyle (Nicole) Johnson, Lisa (Pete) Lapczynski and Keith (Ann Marie McKenney) Johnson.; 2 great-grandsons Evan Johnson and Nathan Lapczynski and Baby Boy Johnson due in May; and brother Robert (Barbara) Pearson. He was preceded in death by his wife of 51 years Sue; sister Joan Heck, his parents, and step- father Harry (Pa) Demode. Memorial donations may be made to Calvary United Methodist Church or the Holly Athletic Boosters. www.dryerfuneralhomeholly.com

Maurice F. Pearson, age 86, of Holly, passed away on Feb. 10, 2016. Funeral services will be held at 11:30 AM Fri. Feb. 12, 2016 at the Dryer Funeral Home, Holly, with Pastor Cliff Schroeder officiating. Military honors and burial will be at... View Obituary & Service Information

The family of Maurice F. Pearson created this Life Tributes page to make it easy to share your memories.

Send flowers to the Pearson family.