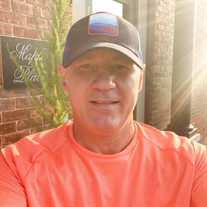 Michael Churchill, of Holly, Michigan passed away Sunday, November 28, 2021 after a short battle with cancer. Michael was born on December 8, to Teddy and Anita Churchill in London, Ontario. He attended Sir Wilfred Laurier, receiving a spot on the championship football team, a feat he was highly proud of. After graduation, he attended Durham College and earned a degree in Sports Administration/Management. Michael’s ambition was to pursue a career in the sports and entertainment industry. He was a true industry leader making an impact with his unprecedented vision, passion and drive. His most recent role was Director of Facility Operations for the Detroit Red Wings/Olympia Entertainment. Though Michael was taken too soon, the imprint he has left on us all will last forever. Michael’s big personality and contagious energy will be greatly missed. Michael’s legacy will continue through his three children, Caitlyn, Ethan and Michael. He was a role model for his children, teaching them valuable life lessons. He proudly coached his son’s hockey team and had many proud moments watching his daughter’s skating achievements. Michael is survived by his mother, Anita Churchill, brother Terry Churchill and his nieces; Sydney and Madison, his Aunt Carol and Uncle Gerry Pinch, his “Pops” Fred, Shirley, Craig and Danielle Duffenais and his life partner, Janelle Dionne. Michael was preceded in death by his father Edward (Teddy) Churchill. A Memorial will be held at Little Caesars Arena on Saturday, December 4, 2021 from 11am – 1pm. In lieu of flowers, donations can be made to his children, Caitlyn, Ethan and Michael. To make a donation go to: https://gofund.me/f3c57cf7 www.dryerfuneralhomeholly.com

Michael Churchill, of Holly, Michigan passed away Sunday, November 28, 2021 after a short battle with cancer. Michael was born on December 8, to Teddy and Anita Churchill in London, Ontario. He attended Sir Wilfred Laurier, receiving a spot... View Obituary & Service Information

The family of Michael Edward Churchill created this Life Tributes page to make it easy to share your memories.

Send flowers to the Churchill family.