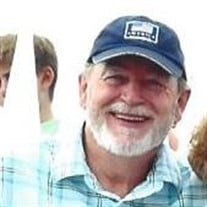 Michael E. Goodman age 65, of Holly died Tues. Jan. 23, 2018. Funeral services will be held at 11 AM Tues. Jan. 30, 2018 at the Dryer Funeral Home, Holly with Pastor Ed Pedley officiating. Burial and military honors will be at Great Lakes National Cemetery following the service. Visitation will be Mon. from 2-9 PM. Mr. Goodman was born Feb. 27, 1952 to Donald and Jacqueline (Quinlan) Goodman. He is survived by his wife Diane; sons Michael Jr. (Dea) Goodman of Sterling Hgts., Joseph (Melissa) Goodman of Detroit, and daughter Kayla Goodman of Holly; brothers and sisters Cindy (Bill) Degnan of TN., Janet (Frank) Sottile of LaSalle, Bill (Kathy) Goodman of Monroe, David (Carol) Goodman of Mio; grandchildren Mikenna, Liana, Dominic, Laurice, Lilly; and many nieces and nephews. Mike and Diane (Carter) were married on Aug. 8, 1987 at St. Mary Catholic Church in Rockwood, MI. He enjoyed golfing, traveling, going to casinos, fantasy football, and making people laugh. He has been an employee of General Motors for the last 29 yrs. in pre-production as a specification analyst and involved in a veterans group there. He was a US Navy veteran. He was a loving husband, dad, grandpa, son, brother, and a wonderful neighbor and friend. He will be greatly missed by all. He was preceded in death by his father Donald and his brother Tommy. Memorial donations may be made to the Wounded Warrior Project.wwwdryerfuneralhomeholly.com

The family of Michael E. Goodman Sr. created this Life Tributes page to make it easy to share your memories.

Send flowers to the Goodman family.