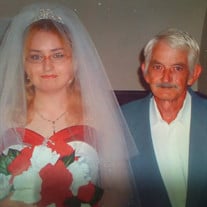 Paul E. Rowe, age 71, of Fenton, died Sat. Dec. 17, 2016. Funeral services will be held at 1:00 PM Wed. Dec. 21, 2016 at the Dryer Funeral Home, Holly, with Pastor Philip Martyn officiating. Burial will be in Lakeside Cemetery, Holly. Visitation will be from 2-9 PM Tues. Mr. Rowe was born in Elkhorn City, KY on March 3, 1945 to Ray and Bertha Rowe. He was retired from GM after 30 years of service as a dedicated and hard worker. He was a good husband, father, and provider for his family. Surviving are his wife of 48 years, Bertha; 5 children, Paul Rowe Jr. of Flint, Arthur Rowe of Fenton, Daniel Rowe of Fenton, Crystal (Justin) Guinn of Rose Twp., and Christina Rowe of Fenton; grandchildren, Ashley Rowe, Audrey Rowe, Angel McCallister, Malachi Markley; great-grandchildren, Graysin, Ava, and Don; brothers Ernest and Billy Rowe; and sisters Brenda and Mary Kay. He was preceded in death by his parents, his son Jerry, and brothers Roger, Johnny and Randall. Memorial donations may be made to St. Jude's Children's Hospital. www.dryerfuneralhomeholly

The family of Paul E. Rowe created this Life Tributes page to make it easy to share your memories.

Send flowers to the Rowe family.