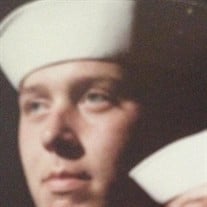 Paul Edward Swanson, age 48, of Gibsonburg, OH, passed away early Sunday morning Nov. 2, 2014 at the Pro Medical Memorial Hospital in Fremont, OH. He was born on March 6, 1966 in Adrian, MI. the son of Donald Eugene and Sara (Jennings) Swanson. After graduating from Blissfield High School, he served 4 years in the United States Navy. After his years in the service, he worked at Sunrise Farm, served as a volunteer firefighter for the Palmyra Fire Dept, and also worked at Liquid Container in Delta OH. He is survived by his wife Kathleen McNamara, and his brothers, Troy, Nathan and Aaron Swanson. He leaves behind many nieces, nephews, and many family and friends that loved him. Paul enjoyed the outdoors, hunting, fishing, and the cabin in Upper Michigan. He also enjoyed watching his favorite sports teams, the Detroit Lions and Tigers, and he was a really good bowler. Paul was a great brother and a great friend. He will be greatly missed. Military honors and inurnment will be at 1:30 PM Fri. Nov. 21, 2014 at Great Lakes National Cemetery, Holly, MI. www.dryerfuneralhomeholly.com

The family of Paul Edward Swanson created this Life Tributes page to make it easy to share your memories.

Send flowers to the Swanson family.