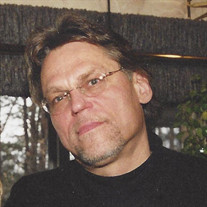 Per Einar Holthe, age 67, of Argentine, formerly of Dearborn, Michigan, died at DMC Hospital in Detroit on December 11, 2016. Born December 27, 1948 in Dearborn, Michigan to Rolf and Ruth (Nordstrom) Holthe, who predeceased him in death. Per attended Wayne State University and honorably served in the United States Air Force in Tucson, Arizona and overseas where he served as a graphic designer, before joining the Ford Motor Company at its Dearborn, Michigan world headquarters until his retirement in 2008. Always the life of the party and on the go, Per lived life with zeal and boundless humor and enthusiasm. An accomplished artist in the mediums of tile, clay and paint, and an active member of the Flint Institute of Arts, his works were showcased in numerous art galleries throughout the state, including those in Traverse City, Petoskey and Harbor Springs. He was an active and proud member of the American Legion and frequented area hospitals and nursing homes with his beloved service dog, Ola. Following his retirement from Ford, he worked as a waiter at Black Rock restaurant in Hartland, Michigan, where he continued to forge friendships with his colleagues and guests, by whom he will be deeply missed. Most recently, he worked for the LaFontaine car dealership shuttling cars between dealerships. In his spare time he enjoyed golf, travel, skiing out west and in Europe with the Ford Thunderbirds, life on Lobdell Lake and riding his Harley-Davidson Street Glide. Known affectionately to his family and friends as “Uncle Buck”, Per is survived by his sister, Linda (Holthe) Bowron (Larry), nieces Heidi (Bowron) Acuna (Michael) and Heather (Bowron) Kelly; nephew Aaron K. Bowron; and great nieces Carlie Devlin, Kelli Kitson, Alectra Acuna and Violette Bowron (“I’m going to get those ears!!!!”). Per loved the Lord Jesus Christ and accepted Him as his Redeemer and Savior, and found peace and fellowship in the Seventh-day Adventist Church. The sting of his death is lessened by the faith his family has that they will one day reunite with him in the Kingdom of Heaven. Memorial services will be held at 4:00 PM Sun. Dec. 18, 2016 at the Dryer Funeral Home, Holly, with a visitation from 2 PM until the time of the service on Sunday. www.dryerfuneralhomeholly.com

Per Einar Holthe, age 67, of Argentine, formerly of Dearborn, Michigan, died at DMC Hospital in Detroit on December 11, 2016. Born December 27, 1948 in Dearborn, Michigan to Rolf and Ruth (Nordstrom) Holthe, who predeceased him in death. Per... View Obituary & Service Information

The family of Per E. Holthe created this Life Tributes page to make it easy to share your memories.

Per Einar Holthe, age 67, of Argentine, formerly of Dearborn,...

Send flowers to the Holthe family.