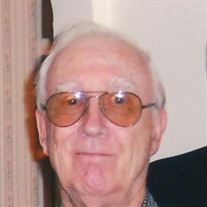 Robert James Gagel, age 98, of Clarkston, died Tues. July 12, 2016. A Memorial Mass will be celebrated at 10:30 AM Tues. July 19, 2016 at St. Rita Catholic Church of Holly, with Father Dan Liderbach, Celebrant. Military honors and Inurnment will be at 10:00 AM Mon. Aug. 1, 2016 at Great Lakes National Cemetery, Holly. Bob was born on Feb. 19, 1918 in Hartford, Connecticut. His mother, Jenny died a little more than a year later from complications of the flu. Bob was placed in a children's foster care facility, while his father James worked. James met and married Katherine, who worked at the child care facility, taking care of little Bobby. Bob was an only child but a happy child. He loved his mother and father. After graduating high school he went to a technical school for drafting and then got a job at Pratt Whitney Aircraft. Bob joined the Army National Guard in 1938. In 1941 he joined the regular Army and was assigned to the 191st Tank Battalion at Camp Polk, Louisiana. While in the hospital for an ear infection, Bob met a pretty young Army nurse named Helen. She was the apple of his eye. Unfortunately the romance was put on hold because of World War II. Helen was assigned in the Pacific Theater and Bob was medically discharged because of his ear. In June of 1946, Bob and Helen were married at St. Michael's Church in Pontiac, MI. They recently celebrated their 70th wedding anniversary. Bob retired from Pontiac Motors in 1974. He loved to read about history, science and everyday events. He was a gifted artist with many oil paintings and drawings to his credit. He spent 10 years researching and writing a manuscript on the Civil War Battle of Gettysburg. Most of all, he was a devout Catholic and walked the talk. He was a good role model as a husband and father. Beloved husband of Helen M. Gagel (Cosgrove). Beloved father of Scott Gagel (deceased), James Gagel (Kim), Katherine Stevens (Richard), Annemarie Weers (James). Beloved Grandfather to Jeannie Costello (Richard), Rebecca Stevens, Robert Gagel (Asia), Craig Gagel, Tara Hambrick (Brad), Tyler Weers (Steffanie), Ryley Weers. Beloved Step Grandfather to Cody VanderKaay (Corinne), Wrylie DeLong (Joseph). Beloved Great Grandfather to Kate and Abby Costello, Ethan and Owen Hambrick, and Nora Weers. Beloved Step Great Grandchildren to Jordyn Guthrie, Joesey DeLong, Chase and Skye Marshall, Mazzee and Cyrus VanderKaay. www.dryerfuneralhome,holly.com

The family of Robert James Gagel created this Life Tributes page to make it easy to share your memories.

Send flowers to the Gagel family.