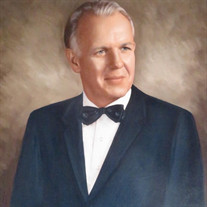 Robert Arthur McKenney, age 97, of Linden, MI (formerly Holly) died Friday, December 7, 2018. A funeral Mass will be celebrated at 11 am Thursday, December 13 at St. Rita Catholic Church of Holly. Father Peter Etzel, S.J. and Father David Blazek will be officiating. Military honors and burial will be at Great Lakes National Cemetery, Holly. Visitation will be held 2-9 PM Wednesday at Dryer Funeral Home, 101 First Street, Holly, MI with Rosary prayers at 5 PM. Robert was born in Amsterdam, NY to Archie and Sarah McKenney, October 15, 1921. After graduating from St. Mary’s Institute in 1939, Robert attended and was graduated Summa Cum Laude from Niagara University. Robert served in the United States Army during World War II. He was wounded in combat and awarded the Purple Heart. Robert married Virginia Bottecelli on September 22, 1945 in Fenton, MI. Robert attended Syracuse University Law School, where he graduated with distinction and third in his class. Robert began his practice of law at the firm, Levene & Gouldin in Binghamton, NY. In 1951 Robert, Virginia and their three children moved to Holly where Robert commenced his law practice as a member of the State Bar of Michigan. Robert and Virginia worked together for decades in their home raising their six children and at Robert’s law office. Robert’s acumen and professionalism as a lawyer were highly regarded by his clients and his fellow lawyers. Robert was proud of his Irish roots and cherished his faith, his family and his friends. Robert is survived by his children Michael (Kathy) McKenney of Durand, Patrick (Susan) McKenney of Holly, Maureen (David) White of Webster NY, Thomas (Jane) McKenney of Holly, Timothy (Marianne) of Carrollton, TX, eleven grandchildren and six great-grandchildren. Robert was preceded in death by his wife Virginia, who died September 22, 2018 on the couple’s 73rd wedding anniversary, and by his son, Father William G. McKenney, S.J. Memorial donations may be made to Red Cloud Indian School. www.dryerfuneralhomeholly.com

The family of Robert A. McKenney created this Life Tributes page to make it easy to share your memories.

Send flowers to the McKenney family.