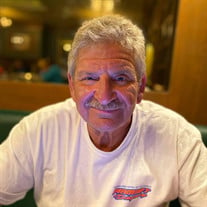 Robert Paul Sirko, of Holly, MI, was welcomed into the arms of his Heavenly Father on February 17, 2021. Robert was born October 21, 1953, the third son of John & Margaret Sirko. He was preceded in death by both of his parents and his brother Dr. Dennis Sirko. Robert is survived by his beloved wife of 24 years, Wendy Sirko, his children Robert and Michael Sirko (mother Marcia Juszczyk), Ryan Sirko (mother Mary Gunderson Ireland), stepson Ian Sexton, stepdaughter Melodey Sexton (John), and grandchildren Kayla, Leah, Jessie, Tyler, Jacob, Adler, Adalynn, Finn, Parker, Riley, and Azalea. He is also survived by his brother David (Barb) Sirko, brother John (Nancy) Sirko, sister Peggy (Dan) Paulson, and many adoring nieces and nephews. Robert's special friends: Bob Alverson, Keith Andes, Stanley Robertson, Dennis Cogley, Scott Douglas, Bob Douglas, Kenny Goodrich, Dennis Dangler, Daryl Dangler, Derek Chew, and Mark and Mike Ruhlig of Villagers Restaurant in Holly, MI. Robert grew up in the 1950s and 60s in Warrendale, MI, a community in far western Detroit. As a child, he could be found roaming Rouge Park with his buddies, the "Pierson Gang", and swimming at Brennan Pools. He would often reminisce of trips to Disney World with his young family in the 1970s, sharing fond memories of his boys. Robert (Bob), was a retired chef that lived life to its fullest. He made the tastiest burgers and always invited family over to partake. He was known as "Bubba" to many of his friends and family. Bob loved cars. Vintage and muscle cars were his favorites. On any given day he could be found in his garage working on his Jeep, preparing it for the next great adventure he and Wendy were going to take. Whether it be traveling the western United States, a cruise on the Atlantic, road trips through the Smokey Mountains listening to Bob Seger, weekends rockhounding on the Great Lakes, or Jeeping over the Dunes, Bob never tired in making memories with Wendy. He also had a deep love for his grandchildren and spent endless hours splashing in the pool, taking them camping, and just watching them play. They were his world. Bob will be forever loved and missed by many. Bob believed in Jesus Christ and now resides with Him in Heaven where he waits for his loved ones to join him. “For God so loved the world, that he gave his only begotten Son, that whosoever believeth in him should not perish, but have everlasting life.” John 3:16 A graveside service will be held on Monday, February 22, 2021, at noon with Pastor Kannerd Van Camp officiating in the Garden of Hope in White Chapel Memorial Cemetery in Troy, MI.

Robert Paul Sirko, of Holly, MI, was welcomed into the arms of his Heavenly Father on February 17, 2021. Robert was born October 21, 1953, the third son of John & Margaret Sirko. He was preceded in death by both of his parents and his brother... View Obituary & Service Information

The family of Robert Paul Sirko created this Life Tributes page to make it easy to share your memories.

Robert Paul Sirko, of Holly, MI, was welcomed into the arms of...

Send flowers to the Sirko family.