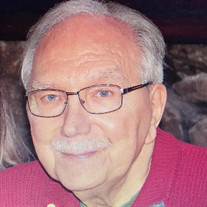 Robert Suski (Bob) age 86 of Holly MI died at home May 2, 2020 in the presence of his beloved wife. Bob was born in Flint MI January 25, 1934, the youngest of 9 children to Anna and John Suski, immigrants from eastern Europe. He is survived by his wife of 41 years Beverly, daughters Bobbi (Kent) Coleman, Tina (Roger) Harburn, and Kari Gallagher (Kevin Pearce), grandchildren Brooke Holden, Emma Coleman, Alex Harburn, Sarah Kate Coleman, Molly Coleman, Kaitlyn Harburn, and Madison Harburn, numerous nieces and nephews, many sister and brother in-laws, and his much loved dog Bo. He is preceded in death by his parents, sister, and brothers. Bob was a journeyman electrician, as were his seven older brothers. He worked for several electrical contractors and after more than 20 years of service he retired from Buick City in 1996 as a maintenance foreman. He was a member of St Rita’s Catholic Church in Holly MI and a proud 4th degree Knight of Columbus. He enjoyed working as a private investigator for the Cooper Agency also. Bob was a character of epic proportions, he was hardheaded and stubborn, he had a great smile and laugh, he could repair anything he set his mind to, and he enjoyed restoring vintage cars and furniture. One of his many restorations was a 67 foot tall vintage windmill that he brought home in three sections on the top of his el camino. Bob loved vintage cars, treasure hunting for antiques, watching westerns, pickled bologna, donuts, tootsie rolls, and the occasional cocktail. Above all he loved his beloved wife Bevie Gail, his daughters, son in-laws, grandchildren, and dog Bo. Fly to the angels Dad. We will miss you but will take comfort in the knowledge that you are in a better place free from pain and sadness. A private family Funeral Mass will be celebrated at 1:00 PM Fri. May 8, 2020 at St. Rita Catholic Church of Holly with Father David Blazek, Celebrant. Burial will be in Lakeside Cemetery, Holly. In lieu of flowers, memorial donations may be made to the Knights of Columbus of Fenton. www.dryerfuneralhomeholly.com.

Robert Suski (Bob) age 86 of Holly MI died at home May 2, 2020 in the presence of his beloved wife. Bob was born in Flint MI January 25, 1934, the youngest of 9 children to Anna and John Suski, immigrants from eastern Europe. He is survived... View Obituary & Service Information

The family of Robert J. Suski created this Life Tributes page to make it easy to share your memories.

Send flowers to the Suski family.