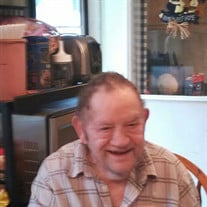 Robert K. Watson, age 78, of Holly, died Wed. Jan. 6, 2016. Funeral services will be held at 2:00 PM Sat. Jan. 9, 2016 at the Dryer Funeral Home, Holly with Pastor Ed Pedley officiating. Burial will be in Lakeside Cemetery, Holly. Visitation will be from 12-2 PM Sat. Mr. Watson was born in Davisburg on June 4, 1937, the son of Dick and Hilda (Kier) Watson. He was a US Army veteran and was retired from General Motors. Mr. Watson was a loving family man. He also loved to fish, loved sports, and was a die hard Tiger fan. He is survived by 5 children, Linda Watson of Port Huron, Shirley (Joe) Batzer of Holly, Sherri (the late Fred) Hoffman of TN, Mary (Randy) Bowerson of Lapeer, and Robert Watson Jr. of TN; 13 grandchildren; 23 great-grandchildren; 5 sisters, Mary Lou, Wilda, Sally, Patricia, and Susan; and brother Albert. He was preceded in death by his parents, and brothers Lyman, Elmer, and Richard. Memorial donations may be made to the American Diabetes Assoc. www.dryerfuneralhomeholly.com

The family of Robert K. Watson created this Life Tributes page to make it easy to share your memories.

Send flowers to the Watson family.